Among all the statements and confessions in the history of the church, the 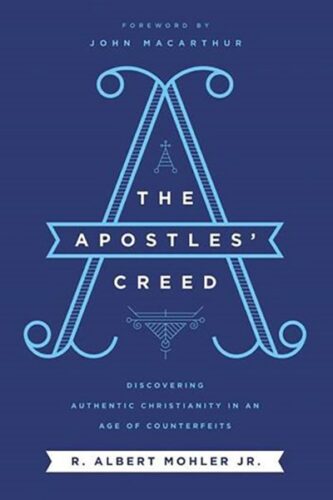 Apostles’ Creed stands above them all, R. Albert Mohler Jr. writes in a new book seeking to rekindle a love for the creed nearly 2,000 years after its writing.

Recited in churches of all traditions and varieties across the world — and in every commencement ceremony at Southern Baptist Theological Seminary — the Apostles’ Creed has long been considered the basic teaching of Christianity.

It is much more than a historical document but a deeply compelling and transformative link between Christians old and new, Mohler, president of Southern Seminary, writes in “The Apostles’ Creed: Discovering Authentic Christianity in an Age of Counterfeits,” released by Thomas Nelson publishers.

As the oldest creed in Christianity, The Apostles’ Creed represents the church’s earliest attempt to summarize the Christian faith expressed across the whole counsel of God, Mohler said in an interview. It was not just an abstract statement of faith, however — it was often the final recitation of Christian martyrs in the earliest days of the church.

“There is something incredibly reassuring and comforting — courage-providing and heart-molding — about confessing the Christian faith as Christians have confessed it for two millennia,” Mohler said. “Christians have died for this. Every one of these words has been hammered out in biblical reflection, serious theological study, and the worship of Christ’s people throughout the centuries.”

The book is the third installment in Mohler’s series of works about three central expressions in Christian faith and practice: The Ten Commandments — 2009’s “Words from the Fire”; The Lord’s Prayer — 2018’s “The Prayer that Turns the World Upside-Down”; and now The Apostles’ Creed. These have long been three legs of a stool in Christian teaching, he said, and have commanded the attention of the greatest theologians throughout church history.

“Every generation of the Christian faith has to be absolutely certain that we are not saying something new, that we are not inventing, developing, evolving, negotiating a new Gospel — a new theological structure,” Mohler said. “[The apostle] Paul told Timothy that one of his main responsibilities was to maintain the pattern of sound words. Now, the most important way we do that is by latching ourselves to the Word of God. In so doing, we have to summarize what the Bible teaches.”

Despite the creed’s central role in church history, some Christians have claimed “no creed but the Bible” as their battle cry. But that apparently noble statement, Mohler pointed out, often came from liberal theologians who denied essential truths of Scripture. Even those with a genuine, good-faith aversion to creeds, he said, will eventually need to summarize Christian teaching when explaining the Gospel. Essentially, they will write a creed of their own anyway.

“Where there is an aversion to creeds, it’s almost always rooted in the fear that some creed is going to replace the authority of Scripture,” Mohler said. “But even those who would, on that basis, reject a creed have to turn around and create one of their own simply to summarize what the Gospel is, who Christ is, what the Bible teaches.

“I think there is a lot of danger in devising one of our own,” Mohler added, “and there’s a great deal of security in using the word the Christian church has used throughout the centuries, wherever it has been found.”

The Apostles’ Creed is not just a faithful explanation of what Christians believe, Mohler said — it can also be the basis for true Christian unity.

While the ecumenical movements of the 20th century sought an artificial unity built on doctrinal minimalism, the Apostles’ Creed can foster genuine unity around the core, fundamental truths of the faith, he said, noting that each denomination will have unique beliefs that extend beyond the Apostles’ Creed, but agreement about the creed itself is what defines all genuine Christians everywhere.

I believe in God, the Father Almighty,
maker of heaven and earth;

And in Jesus Christ his only Son, our Lord;
who was conceived by the Holy Spirit,
born of the Virgin Mary,
suffered under Pontius Pilate,
was crucified, dead, and buried;*
the third day he rose from the dead;
he ascended into heaven,
and sitteth at the right hand of God the Father Almighty;
from thence he shall come to judge the quick and the dead.

I believe in the Holy Spirit,
the holy catholic** church,
the communion of saints,
the forgiveness of sins,
the resurrection of the body,
and the life everlasting. Amen.

*Traditional use of this creed includes these words: “He descended into hell.”
**universal