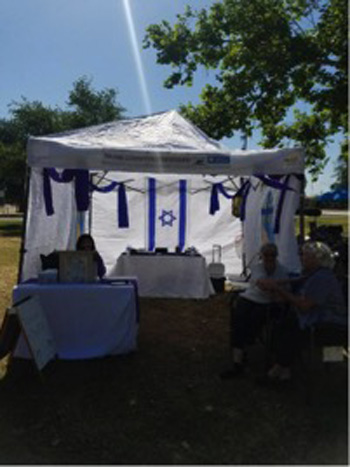 A movement of prayer tents has been spreading throughout communities, big and small. Groups of believers interested in kingdom change and demonstrating the love of Jesus have been motivated to get outside the walls of the church and into the streets to promote the truth about Jesus Christ under prayer tents.

Here the love of Jesus is shared through pure fruits of the Spirit as in Galatians 5:22-23: “But the fruit of the Spirit is love, joy, peace, patience, kindness, goodness, faithfulness, gentleness, self-control; against such things there is no law.”

The tents break down barriers like nothing else can. There is no pretense, no preaching, no law, no Christian jargon nor lingo, no politics – just love and compassion. There are no hidden agendas or fees, no judgmentalism, no offerings taken, no arguments – just light. All prayer seekers are spoken to with honor and respect as Jesus would, without drama or embarrassment.

Barriers are broken. Hearts are lifted. Hope is restored.

One awesome example is a couple, Juan and Patty Tirado, of Porterville, CA who have erected prayer tents in many venues such as swap meets and concerts. At “The Blessing of the Bikes” they have encountered levels of desperation from “everyday folks” that has been alarming. People are looking for answers, as societal stress levels have risen.

Patty reports that God first put it on her heart to offer prayer on Facebook, as she felt an urgency to reach friends and family about Christ. This Facebook prayer page quickly evolved into a mini revival with people Patty didn’t even know watching how she prayed because they did not know how to communicate with God, much less petition Him. Many testimonies soon came back to Patty and Juan. Patty realized that she wanted to do more and reach more people.

At the same time, God was putting it on Juan’s heart to start a tent or canopy approach to offer prayer since he had been watching Todd White ‘let Jesus be Jesus’ in communities. This led to the Tirados offering prayer tents in parks and other local venues as God told them; “I need you out there praying for My people.”

Juan first told the Lord “no,” but God eventually changed his heart through a vision he received of a great revival, with God telling him to “fish” wherever he wanted. In the vision, Juan went to the depths of hell where he yearned for the resurrection of his body. God showed him revival and reformation, and how God had called him to set people free.

Now Juan and Patty offer prayer in many communities in the Central Valley of California under their tents.

Soon, testimonies began to pour in. One woman, whose granddaughter was held captive in an unknown location, asked for intercession. She came back to the Tirado’s to report that the very night she asked for prayer, the perpetrator was airlifted to a hospital and her granddaughter was able to somehow flee her captivity. Police found her and took her to safety that very night! 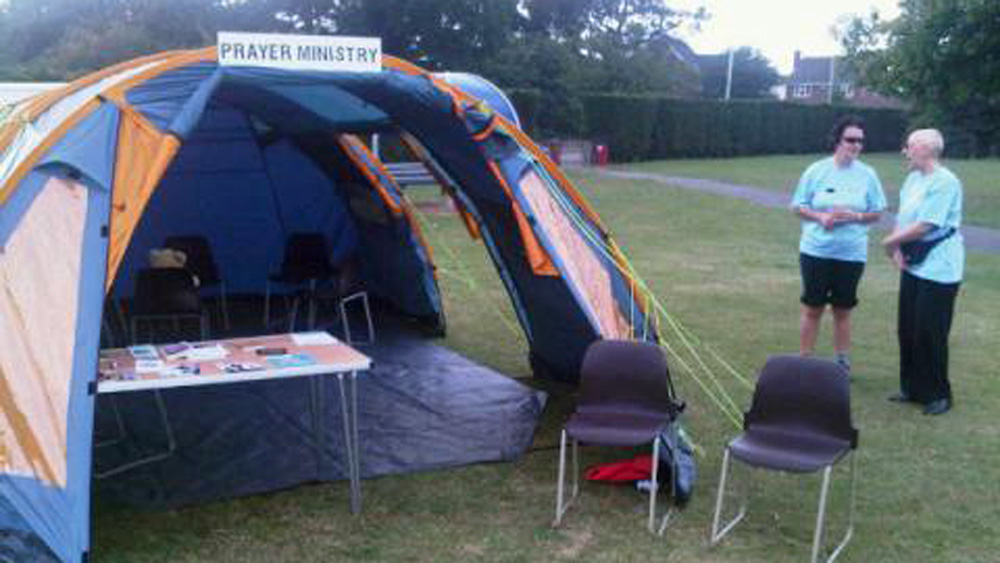 One beauty is that there is usually little or no cost involved to putting up the tents. Also, nothing is advertised. It is just the Holy Spirit drawing people to the tents, which are often picnic or “pop-up” tents that many people have in their garage. Sometimes free bottled water and bookmarks with scriptures are handed out with a business card for follow-up and testimonies.

A few tents have included a live worship group or single worshipper; but the main idea is just offering Jesus’ love, for it is the “Good News” of Jesus Christ that leads all to repentance. Most have handmade signs that read “Want Prayer?” “Free Prayer” or “Prayer Here” in both English and Spanish to passersby.

After setting up, the prayer tent is prayed over and anointed; then the Lord is exalted (Ps 100:4) and the Holy Spirit invited to flow. Next, the workers take communion. As people flow in and they begin to pray, the workers (working at least in “two’s”) take a little time to let God’s Presence rest on the person seeking prayer – then smiles come and they see a thousand pounds lifted off the prayer pursuer.

As the scripture says “”Again, truly I tell you that if two of you on earth agree about anything they ask for, it will be done for them by My Father in heaven” (Matt 18:19).

Prayer seekers are encouraged to ask for forgiveness and restitution along with their requests. The praying volunteers seek the Lord’s knowledge, guidance and direction for each person’s needs and for the root of the problem. Many arrive desperate for help, asking for prayer in a place they perceive to be a safe non-intimidating environment. After the prayer, sources for a church or ministry are offered.

The volunteers report that all types of people from all walks of life come to the prayer tents without hesitation because there is no pretense nor expectations which the seeker would expect in a church, and because that seeker does not know the “prayor”.      Jesus indeed is the focus as He is the answer to the great needs of the people. It’s time that we go out and share His mercy and compassion without encumbrances.

The Tirados consider it all fun, interesting and life-changing in every circumstance, no matter what. However, they advise that this type of ministry is not for the “faint of heart” and not for the immature or religious. Maturity, the Word and much wisdom are necessary. Volunteers need to know how to spread God’s love and hope to a diverse cross-section of people.

Juan reports that the most opposition that they have felt was at a July 4th celebration. Beforehand, the Lord told him to just show love; and when he did, many people were saved, and lives were changed. Some people had been partying and drinking; however, people came up to the tent for prayer for such things as addictions and family problems. One family was facing eviction.

Some recognized that substance abuse was not changing their circumstances or relieving their pain. Juan says, “it was their day!” The Tirado’s did not argue with anyone, as some tried, but just shared Jesus’ love; and that was the key. Juan emphasizes that there are “hurting people out there and there is no time for politics, strife or religion.”

“All people are good,” he says. “Just some have gone wrong a little bit.”

Sindee, one of the “local missionaries” in her own organized prayer tents reports that people come in bound, broken, hungry and thirsty for answers and help. They leave with hope, smiling and laughing.

One woman came in hurriedly, fearing a stalker and asking for prayer that he would cease. She reports, “that woman left with peace, calm and the presence of Jesus upon her.”

At some events, fancy car groups or Christian motorcycle groups participate. Beforehand, Christians pray over the city and the park. At one recent event, each prayer tent had long lines of people asking for prayer. They estimated that 500 people attended the latest event with about 60 receiving prayer and intercession, with some accepting Jesus Christ as their Lord and Savior and some receiving instant physical and emotional healing.

Many people stop by for prayer at prayer tents even if there is no event used as a draw. Sometimes it is not the homeless or disadvantaged but people of means who stop their cars and park, asking for prayer, needing hope and someone to agree with them in love. Many are believers who do not know where to turn, needing help, some even doubting their beliefs, and some with no church home.

Individuals have stopped for prayer and healing for such issues as cancer or other illnesses, depression, emotional issues and family problems. At times, police and first responders have asked for intercession for healing of trauma, stress, family issues, and safety. Several nurses have stopped by asking for prayer for stress and the burden of their vocation.

The Tent Movement brings the Good News to the streets, highways and byways. The tents are never placed beside a church or on church property but on vacant lands, construction areas, downtown or uptown, parks, private homes in neighborhoods, booths in fairs or swap meets, outreaches, or on busy streets, farmlands and crossroads.

Tents can also be set up in disaster areas, homeless hangouts, drug-infested areas and in streetwalker territory. And, not surprisingly, police often welcome the tents in oppressed areas. It’s time that the Church ceases ignoring the great needs of the people who are outside the church.

Each time a person asks for prayer, more light is shed in the darkness of the cities.       As it says in Eph 5:8 &9: “For you were once darkness, but now you are light in the Lord. Live as children of light (for the fruit of the light consists in all goodness, righteousness and truth).” This is how we change a world full of darkness – by bringing light, healing and compassion.

How will they hear unless someone tells them? How will they see unless we go out? For as the Word says in Mark 4:21, “And he said to them, ‘Is a lamp brought in to be put under a basket, or under a bed, and not on a stand? No, that light is to go out into the darkness to help a dying world.” As Christians, we are called to bring that light out into dark places; not just keep our light where other lights surround us all the time!

The tent movement is made up of nameless, faceless, grassroots Christians, foretold to bring the greatest Revival and Reformation ever seen. This movement must involve groups of prayer warriors whose only goal is to reach souls, lift burdens, and bring growth and change to the kingdom. These warriors do not want accolades or recognition – they just serve the Lord and want to see people saved and to know the love of Jesus Christ.

In Luke 10:2, Jesus told them, “The harvest is plentiful, but the workers are few. Ask the Lord of the harvest, therefore, to send out workers into his harvest field”. We may understand seed planting but don’t really understand how to operate in harvest. We must launch our nets into deeper waters, into areas we are not accustomed, to get the greatest catch, or harvest.

It is the organizers prayer that others catch the vision and erect these pop-up tents of prayer in every city and town to spread the love of Jesus, not in a way that people of the world expect from the church. Youth groups, home fellowships, recovery ministries, Bible study groups, men’s and women’s groups can each have their own tents organized. The Word says in Isaiah 49:6: “….I will make you as a light for the nations, that my salvation may reach to the end of the earth.” It is time that we, the Church, be that light and life to a hurting, fearful and distressed world.

Mark 16:15 is Jesus’ words: “And he said to them, ‘Go into all the world and proclaim the gospel to the whole creation’”. The words “Go into the world” is a command, a mandate, not an option. It does not say “just ask people into your church!” It says to go out into the world and bring Him to them. No one is beyond reach and no one is beyond God’s love. We need to take seriously words of Jesus and act like Him in this dark world. If every Bible-believing church and ministry in every city and town erected a prayer tent, think how much light would be shed, how many lives would be changed; and how your nation and the world would change for Jesus Christ!