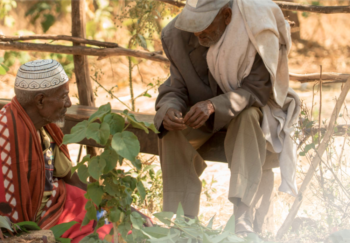 A former sheik and imam came to Christ and suffered terrible persecution, but God re-engineered the circumstances to reap an abundant harvest.

In May 2018, the former imam took a group of new believers to a Christian training conference. “While he was away three men beat his three-month pregnant wife to the point where she lost their baby,” reports Erik Laursen, executive director of New Covenant Missions.

“The men dropped her off at the hospital and then proceeded to steal everything the family owned from their home, even the bed sheets,” he recounts.

The former imam reported the crime to the local authorities. “Do you know who stole all your belongings?” they asked.

“It could have been anybody because they all hate me because I was a sheikh and now I am a Christian,” he replied.

The police then had everyone in the neighborhood swear with their right hands that they did not commit the crime. No one confessed.

A few nights later, the three perpetrators gathered outside the former imam’s house and began screaming and yelling, “like crazy possessed men.”

Alarmed by the display, neighbors brought the three men to the mosque to have the imam cast out the demon or “jin” from them.

As the imam attempted to cast out the demons, the men started yelling back at the imam, “How can Satan cast out Satan, you are one of us!”

They continued to yell and said to the imam and the other sheikhs: “You are the devil, you are the one that made us beat the woman and steal the stuff!” This created a loud argument between the sheikhs, imam, and the three crazed, demon possessed men.

To resolve the situation, the possessed men were ordered to return all the stolen property to the front door of the former imam’s house.

When the former imam awakened the next morning, he opened his front door and was shocked to discover all their stolen property was returned – except for one lost sheep!

Perplexed by this turn of events, he contacted the town elders (also Muslim) to ask where it came from. The town elders organized a meeting to bring reconciliation between the former imam’s family and their Muslim neighbors. The elders assured him they would also find the stolen sheep that had not been returned.

During an investigation, the town elders learned that one of the three men that had stolen the property and beaten the former imam’s wife had gone to the witchdoctor and confessed the crime.

The three men were arrested and jailed for their deeds. The imam and other mosque leaders were warned by the police to not cause any more religious disturbances or the mosque would be closed for inciting religious violence.

A crowd from the neighborhood gathered and it became an unruly scene. The woman threw a rock and severely injured the head of one of the congregants. The town elders, police and mosque leaders arrived to settle the dispute.

“The town elders, being all Muslim and part of the mosque, did not want any trouble that could cause their mosque to be closed,” Laursen recounts.

The former imam explained that they were simply reading the Bible and worshipping Jesus. “He went on to state that the Bible was the book of truth.”

The town elders and mosque leaders told the woman to leave.

But then God did something amazing. He stirred the hearts of the six Muslim town elders to ask questions about the Christian faith. “They knew he used to be a sheikh. He shared with them that he knows they refuse to believe that God could have a son but then he showed them in their own Quran where it actually states that God is a Father.

“They were shocked and wanted to learn more.” As they studied the Scripture, the power of the Word and the Spirit brought conviction and a spirit of repentance.

All six of the town elders surrendered to Jesus as their Lord and Savior and decided to follow Him!

When Erik Laursen first heard the story recounted by the former imam, he was overcome with emotion. “I sat astonished and could do nothing but pray. I simply didn’t even have words to say to this man of God!”

As the two men prayed together, the former imam allowed the Holy Spirit to minister to him and love on him. “It was beautiful and even brings me to tears now, three weeks later,” Laursen says.