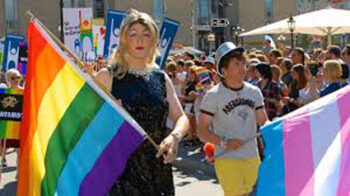 When their daughter went off to college, she was all-girl, liked boys, was intellectually gifted, but struggled with anxiety and depression, like many young people trying to find themselves in a confusing world.

But after a college orientation at a prominent school that invited her to state her sexual orientation and the pronouns she wished to be identified by, she and her friends decided their college adjustment anxieties might be related to “gender dysphoria,” according to a Wall Street Journal article penned by Abigail Shrier, “When Your Daughter Defies Biology.”

Within a year, the young woman had begun taking the male hormone testosterone and embraced the elusive prospect of finding a new male identity.

“A shaved head, boys’ clothes and a new name formed the baptismal waters of a female-to-male rebirth,” Shrier recounted.

Brown University researcher Lisa Littman has identified the trend as “rapid onset gender dysphoria.” ROGD may be distinguised from traditional gender dysphoria, a psychological affliction that starts in early childhood with the feeling that one was born the wrong sex.

“ROGD is a social contagion that comes on suddenly in adolescence, afflicting teens who’d never exhibited any confusion about their sex,” Shrier noted.

What is alarming to parents is that the medical, educational, psychological, and media establishment may invariably be aligned against their wishes.

These powerful institutions are moving in lock step to support “affirmative care” for such students, encouraging their newfound identity.

“You can’t imagine what it’s like to have the entire educational/med/psych/media world fighting against your parental values and common sense,” one parent told Shrier.

Shrier interviewed 18 parents, 14 of them mothers who were horrified by their daughters’ plans, but found scant help to dissuade their daughters from choosing their questionable path.

Planned Parenthood, well-known for their abortion practices, have been providing testosterone to young women in these circumstances without requiring any psychological evaluation, according to Shrier.

One distressed mother posted the following on a conservative website: “My 20-year-old has been on testosterone for a year and has made an appointment for a consult for a double mastectomy. She is paying for the consult and is aware that she will have to fund all co-pays related to transition. Apparently some college girls are able to get loans to do this. I plan to go along on the consult and would be interested in any thoughts from your commenters. It is impossible to express my level of anguish about this.”