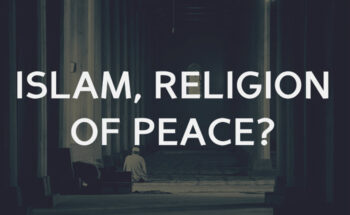 Arham*, 33, grew up in a Muslim family where he learned about Islam at home, in the mosque, and at school. When he reached 17 he decided he wanted to study Islam in-depth, so he began to visit many of the mosques around his town.

“One day he found a sheikh who liked him and so he started to study under him,” Pastor Hakeem* recounted to Final Frontiers Foundation. Arham began to let his beard grow, started dressing more conservatively, and prayed diligently five times a day.

He strove to meet Islam’s religious obligations. “He did this because he was scared of the punishment of Allah,” Pastor Hakeem told Final Frontiers.

As Arham studied he discovered some controversies and contradictions, but was afraid to ask about them. During the Iraq and Syrian wars that engulfed the region, he observed that Muslim people were killing each other in barbaric ways under the name of Islam.

Where is the peace in Islam? he wondered.

Arham studied historic books about Muhammad and discovered that in nine years he was involved in 37 invasions that killed thousands of people — all in the name of spreading Islam.

“The more he searched the more confused he became. The main question that bothered him was, why does Allah love blood, and where is the peace?”

One day Arham came to visit Pastor Hakeem. “I was surprised to see how much knowledge he had about Islam, so I told him, let me tell about the true God.”

The two men talked on many occasions. “He always had questions that spoke of the differences between Allah of Islam with the God of the Bible.”

Finally, Pastor Hakeem gave Arham a Bible to read for himself. The more Arham studied the Bible, the more questions emerged and finally, after a few months of discussions, Arham reached a stunning conclusion:

“Islam will never give peace because in it there is no love, no mercy, no forgiveness, no cross, no resurrection and no new life,” Arham told Pastor Hakeem. “The only One who can give all that is the Lord Jesus Christ!”

Arham accepted Jesus as his Savior and Lord and was born again.

Pastor Hakeem acknowledges the power of the Word and the Spirit working together on Arham’s heart. “My dear brothers there is no other way to convince a Muslim man with this kind of knowledge except when he reads the Word of God.”

To learn more about the work of Final Frontiers Foundation, click here

Little ‘trimtabs’ that have big impact for God’s Kingdom