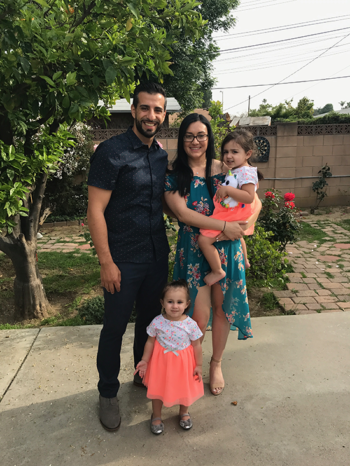 As a Palestinian born-again pastor in Los Angeles, Sameer Dabit sees himself as a bridge-maker.

“My dad grew up with a lot of wounds, so I grew up with the mindset of hating Jews and hating Muslims,” Sameer says. “When I got saved at age 16 and started reading scriptures for myself and learning more about God and history, I started to realize, ‘Hey wait a minute. I shouldn’t hate anybody.’”

Slowly, he began to form his own convictions about what he believes.

Sameer’s Arab father was born in Palestine in 1948 and was forced to move when the Jews took over the newly formed nation of Israel. So he resented the Jews.

But as an orthodox Christian, he also resented the Muslim Palestinians who subjected him to cruel jeering and constant antagonism in school, Sameer says.

When he came of age, dad decided to leave behind the nightmare of the Middle East, move to the United States, study and make his life in L.A. He worked hard at the front desk of a hotel, saved his money and bought properties. 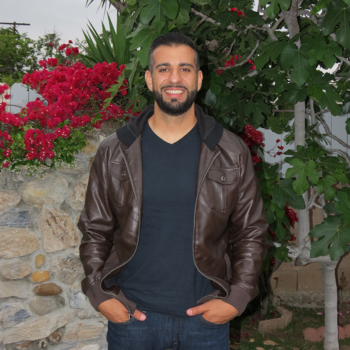 Sameer got to know the simmering anger in his father for the injustices suffered, but he identified himself first and foremost as an American. He changed his name to Sam so that it was easier for classmates and elicited fewer questions about his origins. He loved football.

“I assimilated to America,” he says. “I identified myself more as American than Palestinian.”

Then he did something that went beyond his newfound cultural identification. He accepted Jesus into his heart.

At a basketball clinic run by a church, he liked the dynamic music, heard about the forgiveness of sins and wound up wondering why this environment was drastically different from the reverence and mysticism of his family’s religious practice.

Joining the born-again Christians in America created conflict with his dad, who wondered why his son left their church, got re-baptized and hung out with evangelicals who supported Zionism. 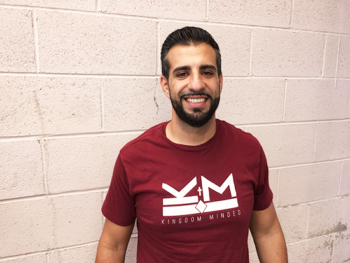 “It started to bring an interesting conflict between my dad and me,” says Sameer, now 31. “I was trying to help him understand that I understood where he was coming from. Whatever someone had done to him or his family, I don’t agree with. He was abused. But at the same time, I believe everyone has a right to a place to live, and at the time, the Jewish people were distributed around the world and suffered the Holocaust. That wasn’t right as well. They did need a place to live. Israel needed to be established again, and obviously that was Biblical.

“I desire to see Jesus restore it all. I know ultimately He will when He returns, but I believe He’s preparing His bride to receive Him in Israel as well as everywhere around the world.”

At age 20, Sameer married a child of an immigrant. His wife, Shirley, is Assyrian but of Russian and Armenian extraction. Before immigrating to America, her family lived in Iran. Shirley got saved at an Intervarsity meeting in college. The couple has two girls.

When he graduated from Monroe High School, Sameer asked his football coach if he could become an assistant. He was still living at home and worked the after-school athletics program, which paid a modest stipend.

Meanwhile, he was consistently serving as a leader in a church in the San Fernando Valley. Kids from the football program started coming to church.

“God rejuvenated my spirit,” he says. “I had a real desire to serve Him, to live my life for Him.”

At first, Sameer and his wife were unable to get pregnant, so they began to wonder if they were called to the mission field. 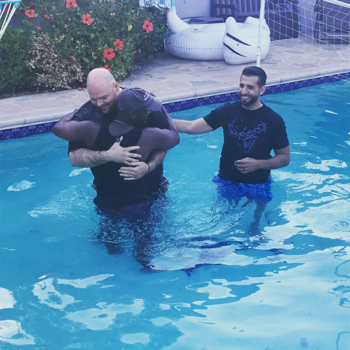 In 2014, he worked with an underground Christian group in the Middle East, that taught English, business and supported community development initiatives. Just when they were thinking this might be a long-term fit, she got pregnant.

They wanted their child to be born in America.

So they headed home. Again they got involved in church. Eventually, Sameer started feeling the call to launch his own church, Kingdom Reality LA, which he started with home Bible studies in the North Hills neighborhood of the San Fernando Valley. He’s linking up with a melting pot of diverse immigrants and socio-economic groups to bring them together as one, the family of God.

“I can really relate to Paul’s life,” he says. “He was raised in several perspectives of people groups. He was raised among a Greek but was as a Jew. As a Pharisee, he had an amazing understanding of the scriptures but he also grew up as a Roman citizen. It make sense why God used him as bridge for reaching the Gentiles.”

He discovered that the preeminent eraser of barriers, discrimination and hatred is Jesus.

“Whether in Israel or in the United States, ultimately we need to bring Jesus Christ into the center of every conflict, because He is the King of kings,” he says. “The family of God needs to come together in a beautiful place in ministry.”