In a breezy, humorous style that some might find impudent, biblical scholar and theologian Peter Enns stirs controversy with his book The Bible Tells Me So, a work that continues in a long tradition of biblical criticism by liberal seminary professors.

Enns questions Mosaic authorship and many of the stories contained in the Old Testament, believing instead that “Israel’s storytellers” during the time of the monarchy shaped and crafted a narrative to enhance their national aspirations – with little regard for historical accuracy.

He doesn’t think the Bible should be used as an “owner’s” or “instruction manual” because “what the Bible says happened often didn’t – at least not the way the Bible describes it.” Instead, he sees the Bible as a more fluid and flexible model for one’s spiritual journey.

Enns is particularly appalled that God would instruct the Israelites to kill the Canaanites during their conquest of the Promised Land. Because the cursing of Canaan seems “extreme and misdirected” and this “genocidal” “warrior-god” appears terrifying to him and out of character with his conception of God, he ultimately decides these events never really happened. 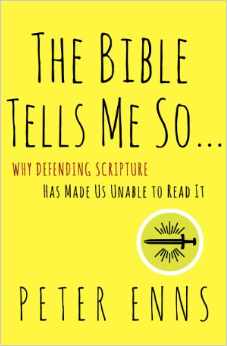 “God never told the Israelites to kill the Canaanites,” he concludes. He says, “the conquest of Canaan as the Bible describes did not happen,” because archaeological discoveries he cites have found evidence that no more than four cities (out of 16) show signs of violent destruction during the time of Joshua.

Could it be that God ordered the destruction of the inhabitants of the Promised Land because of their abominable practices, which included incest, bestiality, child sacrifice and the worship of false gods? If the Israelites had “played nice” with them and inter-married, they would have lost their way spiritually, with mounting corruptions leading to their self-destruction as a people.

God’s infinite wisdom (inherent in His laws and commands) sought to preserve their health and longevity – ultimately as his chosen vessels to bring a saving Messiah to a lost world.

Enns doubts the walls of Jericho fell down, ridicules the idea of talking animals such as Balaam’s donkey, and thinks the Bible’s version of creation was probably modeled after Babylon’s creation story – “to do it one better.”

Such positions have landed Enns in hot water before. His book, Inspiration and Incarnation: Evangelicals and the Problem of the Old Testament, caused his ouster from Westminster Theological Seminary (WTS) in 2008.

At that time, WTS President Peter Lillback said, “we have scholars that love this book, and scholars who have criticized it very deeply…. We have students who have read it say it has liberated them. We have other students that say it’s crushing their faith and removing them from their hope. We have churches that are considering it, and two Presbyteries have said they will not send students to study under Professor Enns here.”

Some may question whether Enns is a born again Christian based on his recounting of his background, which included two years of Lutheran confirmation classes in junior high school, “but not a lot of it stuck.” Then in high school he raised his hand at an evangelistic service because “I was pretty sure I was headed straight to hell, and raising my hand, apparently, was what I needed to do to keep that from happening.”

Later, Enns came to believe – as he notes in his book – that our idea of hell comes from medieval Christian theology, not the Bible. He thinks it would be best if we dropped the use of the word “hell” altogether, “since Jesus never uses it.” With such views, it is no wonder that Rob Bell’s endorsement is listed prominently on the bookjacket.

But If Jesus chose to use a different word, Gehenna, and it describes the eternal abode of torment and suffering, should that matter?

Like Thomas Jefferson snipping out the portions of the Bible he found disagreeable, Enns doesn’t stop with the Old Testament, but continues his termite-like assault on the foundations of the New Testament as well.

He doubts that any of the writers of the Gospels were eyewitnesses, and says the names attached to the books are based on tradition, rather than historical evidence he finds credible.

He supposes that Matthew invented the star of Bethlehem and suspects that Herod’s massacre of the children never happened.

Enns disbelieves John’s account of Jesus turning over the tables in the Temple, because it happened at the beginning of the ministry of Jesus rather than toward the end. “Matthew, Mark, and Luke are likely following the flow of history more than John,” he concludes.

In a none-too-subtle putdown, he refers to the Apostle John as “the odd man out” and says his “story of Jesus is so out of step with the others that it is sometimes hard to see how he could be talking about the same person.”

Attaching Old Testament prophecies to the life of Jesus is particularly irksome to Enns. Jesus’ journey to Egypt and back home again, which Matthew says fulfilled the words of the prophet Hosea, is a prime example to Enns of Matthew’s “creative” reading of the Bible.

He refuses to attach any prophetic significance to such passages, because “for Matthew, what Hosea meant back then isn’t what Hosea’s words ultimately and really mean.”

While Enns says he believes the Bible is the Word of God, his book undermines confidence that all Scripture is God-breathed, inspired in the original writings. As the Apostle Peter states: “We did not follow cleverly devised stories when we told you about the coming of our Lord Jesus Christ in power, but we were eyewitnesses of his majesty.” (2 Peter 1:16)

Jesus himself believed in the historicity of the account by Moses and the prophets. “And beginning with Moses and all the Prophets, he (Jesus) explained to them what was said in all the Scriptures concerning himself.” (Luke 24:27)