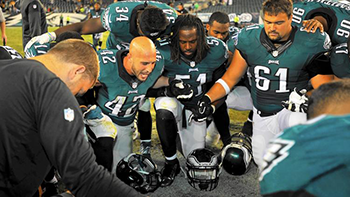 Before the Eagles and the Patriots prepared for Super Bowl LII, behind the scenes another victory was won for Christ, a revival in the Eagles locker room led by injured quarterback Carson Wentz.

The Morning Call headlined it: “So many Eagles have become birds of pray.”

Wentz, who’s tattooed on his wrist AO1 — Audience of One (Jesus), usually doesn’t miss his pass receivers — or opportunities to share the gospel.

When Wentz tore his ACL against the Rams after leading his team to 10 victories this season, some observers feared the Eagles would fall out of the sky. But instead, the Philadelphia team crushed the Vikings to make their first Super Bowl in 24 years.

Wentz had scrambled to a disqualified TD and was crushed between two Rams players when his anterior cruciate ligament, the stabilizer of the knee, snapped. That same night, instead of moping, Wentz published a video of his feelings.

“I have a ton of faith in the Lord and his plan, but it’s still been a tough day. And it will be tough on me for a little bit,” he said. “As I reflect on it tonight, I know the Lord’s working through it. I know Jesus has a plan. I know He’s trying to grow me in something, teach me something, use me somehow, some way. This is going to be a great testimony as I go forward.

“Maybe not all of you are Christians or followers of Jesus, but I can say as a follower of Jesus with a 100 percent confidence that I have the utmost confidence in His plan. His plan is perfect. If we got everything we wanted in life, life would be a disaster. I know Jesus is up there looking down and he knows what He’s doing. So I’m just going to surrender that to Him and trust in Him in that.”

It is no surprise that the man whose faith in God surpasses his love for football has been a spark plug for revival.

Wentz, along with tight end Zach Ertz, linebacker Jordan Hicks and safety Chris Maragos formed a “brotherhood” of prayer, Bible study and public speaking at Fellowship of Christian Athletes. Other team members have joined them in baptismal waters and pews.

Christianity is “just like being an athlete,” Maragos said. “You train yourself physically every day. You’ve got to train yourself spiritually too. So I think it’s one of those things where it’s a continual basis and you just lean on the guys around you for help.”

Tight end Trey Burton agrees. “It’s the most important thing. It overshadows football tremendously. I mean, football is really not that important compared to our faith and what we believe in. It’s huge. It’s not religion; it’s a relationship. That’s what we’re really big on. Religion has rules, relationships are … relationships.”

In May, Wentz went to Haiti for three days to preach the gospel in the impoverished Caribbean island.

It took Marcus Johnson until his second season for him to catch on to what his Christian teammates were doing.

“The guys really helped challenge me and my faith,” Johnson said. “They helped me get to where I am now. I’ve always been a believer. Obviously, I’ve seen guys so strong in their faith, and it inspired me to really understand that I can’t use ignorance as an excuse, like I didn’t know this was wrong or I didn’t know that was wrong.

“Seeing how they’re living, how they’re committed to it, I felt like it was God just pushing me, like, ‘look, you can’t keep making excuses anymore. You’ve go to make that decision. Are you going to take that next step in your faith, or are you going to continue to make excuses?’”

Just hours before the Eagles defeated the Panthers on Oct. 12, Johnson received baptism in front of a bunch of teammates.

Raised in North Dakota, Wentz grew up going to church but was challenged to deepen his faith at North Dakota State University by a predecessor QB. Wentz was a freshman when senior quarterback Dante Perez who sauntered over during stretching and casually asked, “Hey, ever read the Bible?”

“My head was spinning, I had just learned a new language in install meetings and Dante says, ‘Hey, ever read the Bible?’ ” Wentz explained in Delaware Online. “It kind of opened my eyes to what was in the Bible. I read the whole New Testament that first semester. I had a bunch of mentors from the football team who helped disciple me, so to speak.

“Before, I just didn’t really know why I believed what I believed because I was so consumed with life as a kid. But I realized once college rolled around, it was time to make your own decisions. So any time for me, when I want to learn something, I’m going to go after it. I wanted to know why people believed this, what it was about Jesus and who he was. It became super real to me, and I realized that was the most important thing in this world.”

“Honestly it’s sometimes crazy to me, personally, this life that I’m living, playing the game I love for Jesus,” Wentz said. “I get to glorify him while doing something I like to do. It’s pretty cool. I’m very blessed to be surrounded by a number of other believers that just help and encourage me in that. It’s just been really special.”

The Eagles upset the Patriots 41-33 in Super Bowl LII, surprising many around the country — the sweetest of earthly rewards for a heaven-minded team.