Not even jail was as hard as rehab at the Salvation Army Adult Rehabilitation Center in Pasadena, according to Dominique Perry.

To be sure, during his lock-up he faced simmering racial tension and even violence. But he had a lot of free time and made hairbrushes out of soap bars and toothbrushes that he could sell to buy Cokes and chips.

In the rehab, he thought they overloaded him with rules and endless meetings. They raided his room based on “stupid suspicions.” Once, Dominique got raided for an electric toothbrush with attachments that someone thought could be used as a weapon.

“In jail it’s all about survival of the fittest, the bigger guy getting on the little guy. But all you have to do is listen to the guard. You can sleep all day,” Dominique said. “But in rehab you have to wake up early. Two cursings is a kick out. You have to go to three meetings a day. It gets you out of your comfort zone.”

Despite seething under the regimen, Dominique, now 26, graduated after eight months at the rehab center in July 2017, He had kicked meth, is serving the Lord and got a job as a dispatcher for a security company.

He’s come a long way since his early days in Pacoima, a poor, mostly African American neighborhood of Los Angeles. His father left the household when he was a tyke. In high school, he started smoking weed, skipping class and trying to be cool.

“I always said we never needed dad. My mom always gave us everything. She was full of love,” Dominique said. “But maybe I needed him.”

He was good at football and was offered several scholarships for community colleges. But with his mind clouded by drugs, he never accepted one.

“I was picking and cocky. I was ignorant. I wasn’t really thinking,” he said. “I didn’t go to any of them. I just stayed home and started smoking more weed. I started deviating and falling into gangs.”

The nuns were afraid themselves, he said, so he took matters into his own hands. He was already getting big, bigger than his taunters, so he beat them and chased them off.

“I felt powerful,” he said. “That day I went to the barber shop and told my story. Some bloods were there. There was a guy there with new shoes, and he said, ‘You wanna go get them?’ That was the worst mistake of my life. I wanted to feel protected and I wanted to claim something that people would recognize that I could strike fear.”

He was jumped the next day by six gang members. Seeing the bruises afterward, his mom cried and took him to the ER. He lied and said he fell down.

“Joining the gang opened the door of sin. I was constantly trying to prove myself. It led to worse and worse things – shootings and drugs and violence. I started losing control of my own personal life. I lost track of going to school. I lost track of my family. I thought what I was doing was more important.” 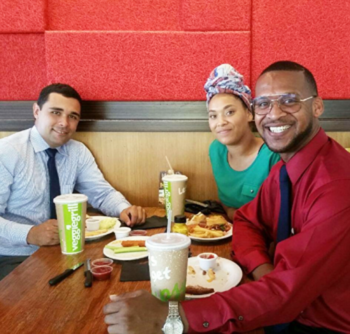 He got arrested for showing off some brass knuckles in high school. Later he was nabbed for wearing red gang gear and throwing signs. When the cops grabbed him, he also had Ecstasy pills and marijuana, when it was illegal in California.

His third arrest was for meth.

“I used to look down on crackheads,” Dominique said. “But some females introduced me to it. I started to think it was cool because I wanted to be a player. I was young and reckless. I wanted to stay up all night and party, and meth was a booster. They persuaded me to smoke it, and I accepted. There was a rush in my body, and then I started smoking it more and more.”

On Sundays, his mom always invited him to Catholic Church, and sometimes he went. He believed in God, but God was distant. Then his sister, Brittany, accepted Christ in an evangelical Christian church.

“She started being so positive. She stopped the cursing in my house immediately,” Dominique said. “I was trying to be a thug in the street, but at home if I looked a certain way, she would scold me for a long time. I didn’t want my little sister to tell me what was really going on, like bills and stuff. At home, I changed completely.”

But he didn’t change in the street until he bottomed out. He abused meth in an abandoned construction site, where he would spend a week at a time. His mom wandered the neighborhood desperately looking for him. She even brought the dogs to sniff him out.

His hygiene deteriorated. He wasn’t changing clothes or eating. He showed up at home only occasionally to shower or eat, when no one was home. His mom left food out just for him. If she found the plate empty, she knew he had eaten.

“That’s the only way we communicated. She knew I was ok if the food was eaten,” Dominique said. “I made her go through a lot of pain. She’s had my back 100 percent. I cried so many times when no friends were around. I was conscious that I had somebody who loved me. All the people I was around were lost in drugs because they didn’t have somebody who loved them like them.”

He was in the Bloods in Pacoima, but his mom moved to neighboring San Fernando, rival territory, because it was cheaper. The San Fernando gang members, Latinos and rivals, started harassing him, and he had to defend himself. He hid weapons around his home in case he would be confronted at any moment. He got shot at and shot back.

“I was in a lot of life-and-death situations,” Dominique said. “I had to get away. There were people waiting for me everyday. My family and neighbors were paranoid. It was a war zone. I brought the heat to my house. I finally had to get out.”

He sought refuge with relatives who lived an hour away. For three weeks, he kicked the meth.

“I was so full of fear. I was so concentrated on not getting caught by the wrong people that I forgot about the drug,” he said. “I realized that if I set my mind on other things, I could stop.”

After a month, he enrolled in the Salvation Army rehab to cement the changes he initiated.

“Rehab was my last option,” Dominique said. “But I wanted to stop the meth forever, and I knew I couldn’t stop on my own. I was fed up with everything.”

For the first time in his life, he submitted fully to Christ and to rules that made him bristle.

The first was when he checked in: no phone for six months. The second was constant grunt work. The Salvation Army supports its free housing and food ministry with interns working at its warehouse of donated clothes. The next day he started hanging clothes and going to three meetings a day.

It wasn’t the most exciting job. For a month and a half, but he hung clothes for eight hours a day and tried to encourage the newcomers who acted tough.

“I gave my life to Christ before I went there, so I had a different mentality,” he said. “I wanted to recover the love for my family.”

He worked his way up to “dumper” of donated clothes. Then he became a “runner,” the guy who wheels heavy carts of clothes into the warehouse.

Then he was promoted to janitor in the rehab home. It was a job that allowed him to be his own boss and make his own hours.

“Since my attitude changed and I had a different perspective, I saw in the Bible where it says, ‘Work as if you’re working for God,’” he said. “I decided to scrub the showers with happiness. I felt in control. I developed confidence in myself in a positive way. I was building character, disciplining myself.”

He would never miss a chance to pray for hundreds of walk-ins, court-ordered inmates and gang-bangers. One time he was approached in the shower, which is scary because propositions in the showers are usually not good. But he prayed for that gang-banger and the power of God fell.

“After I got out of the shower, he started crying,” he said. “He told me, ‘I’ve seen you praying in the library by yourself. You don’t just pray when people are looking at you.’”

There were times he didn’t want to wake up at 6:00 a.m., or go to meetings, or pull sludge out of the toilet. “I really had to pray hard about a lot of things,” he said. “I was just fresh out of sin. It was hard to keep up with all the rules and accept all the write-ups. If you don’t accept the write-ups, you get kicked out. Once I had to write a 5000-word essay as a discipline.”

Even though incessant meetings were wearisome, Dominique began to find inspiration in them.

“When I left meetings, I felt powerful. Your video-game energy bar gets filled up. It becomes all green,” Dominique said. “I was forced to be in the meetings, but I decided to take advantage of the stories. The Bible and the testimonies changed me completely. It made me have drive to have goals again and to lose fear.”

It’s been seven months since Dominique has been out. A few of his buddies have relapsed, two even died. His felonies got expunged, and he was given a break with employment.

“I started paying attention to the things that mattered,” Dominique said. “I’m praying everyday and putting God first. When people stop going to church and to meetings, that’s when they are most likely to relapse.”

Michael Ashcraft pastors the Lighthouse Church in Van Nuys, the “Church on the Lake.”