Canadian superstar Justin Bieber has 95 million Instagram followers, and recently he has been unabashedly declaring his faith in Jesus on the photo and video sharing site.

Them he added, “Jesus is changing me from the inside out everyday!” 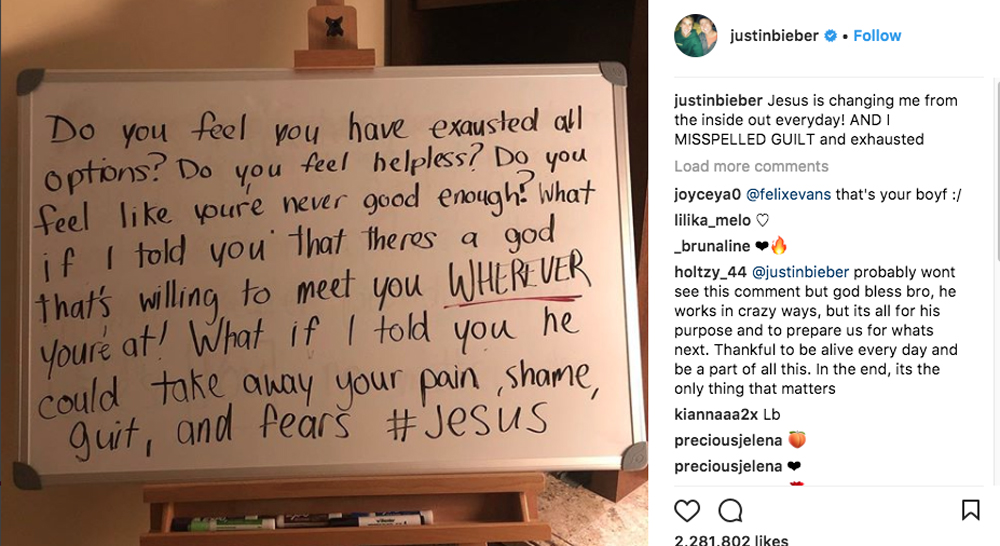 In 2015, Bieber bared his soul about the revival of his faith in an interview with Joe La Puma with COMPLEX.

“I forgot what I was about, what my mom raised me to be,” Bieber confessed. “I veered off, and I got tainted. I came into the music industry at 13. I was trying to trust people and they’d break my heart at 15,” he says.

Bieber became disillusioned with people who took advantage of him. In response, he started to “do his own thing.”

“I got into a little bit of trouble,” he admitted, “—nothing that other 20-year-olds don’t get into—just rebelling a little bit.

He says his behavior pushed the limits. “I was doing anything. I was doing so many things that I shouldn’t even be on the planet still. I think that it (my survival) was by the grace of God.”

Bieber admitted some people around him wanted him to rebel.

Following his first break-up with Selena Gomez, his heart began to soften toward God. “Love is a choice. Love is not a feeling. People have made it seem in movies that it’s this fairy tale. That’s not what love is.

“I can’t lean on people. I got to lean on God. I gotta trust in Him through all my situations.”

Bieber says he wants to focus less on religion and more on his personal relationship with God. “I’m not religious. I, personally, love Jesus and that was my salvation. I want to share what I’m going through and what I’m feeling and I think it shouldn’t be ostracized.”

Bieber says he wants to pursue Christlikeness with increased focus. “I do not want to shove this down anyone’s throat. I just wanna honestly live like Jesus. Not be Jesus—I could never—I don’t want that to come across weird. He created a pretty awesome template of how to love people and how to be gracious and kind. If you believe it, he died for our sins.”

“It’s not a ‘have to.’ It should be just like a personal relationship. Like, ‘Hey, I love you because you first loved me.’

“If we can understand that we’re all imperfect, let’s come to God and come for his help. You’re not weak by doing that.”