When David Kyle Foster was a young actor in Hollywood, he also was living a secret life as a male prostitute, sleeping with three or four men a night.

Then he had a powerful encounter with Jesus that felt like “liquid love” as he read the first chapter of John. In 1987, he founded Mastering Life Ministries to equip the church to minister to those trapped in sexual sin and brokenness.

During his former life in the streets of Hollywood he met transgender people that grabbed his heart.

“I would hang around with transgender people,” Foster recounts. “I had a great deal of compassion for them because they had a level of brokenness that I had not gotten close to.”

As the transgender issue exploded in public awareness following Caitlyn Jenner’s dramatic disclosure, Foster realized the issue was not being addressed properly by the church. He also wanted to help transgender people find healing at the deepest level.

In his new documentary film, “TranZformed” former transgender individuals join with numerous experts to dispel the confusion and bear witness to what Jesus Christ can do for those who struggle with gender dysphoria.

“We are trying to reach Christian leaders who are not trained in sexual brokenness in seminary and the people who are broken themselves,” he says. “The typical pastor when approached by a transgender person doesn’t have a clue.” 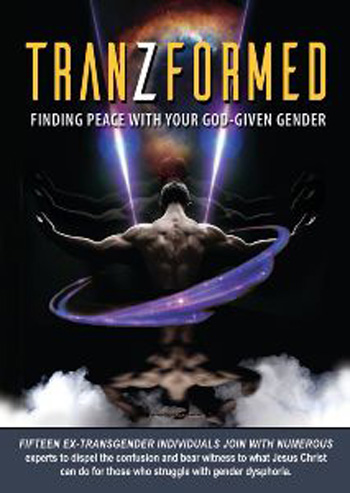 children and adults that are not really transgendered. “They are using them to make money and it’s reprehensible,” he charges.

“If there is one population that should not be taken advantage of, it is transgender people because of their brokenness.”

Foster spent two years making the film, visiting 10 cities and speaking to many former transgender people. “I interviewed 17 people for the film and every single one of them had been sexually abused as a child. That doesn’t mean every transgender has that, but it does mean there is a very high incidence of it, as a causal factor, one of several,” he maintains.

“In interviewing them, I learned there is some form of trauma or neglect in their life that attacks their identity, particularly their sexual identity. Others seem to have deeper psychological issues fracturing of their sense of being itself. That could have come about through sexual abuse or physical abuse or being humiliated and rejected by peer groups.”

Foster finds some causal factors that seem to be similar to homosexuals, but also differences. “There is something unique in a transgender person that attacks their sense of being male or female, not their sexual orientation, but who they are inside. They truly struggle more than anyone I’ve ever met and I’ve been at this for over 30 years. They have a powerful internal drive causing them to believe they are the opposite sex in their own body,” he observes.

The healing process must be God-centered, Foster believes. “It is getting into intimacy with God the Father and letting him name you, renouncing your collusion with the lies, coming to understand that being led by your feelings is a fools game because your feelings lie to you a lot. You have to base your identity in what God says about you rather than what you feel. Discovering some of the traumatic roots is also vital to the healing process.”

“TranZformed” recently won its first film festival award and is the recipient of The Dove Foundation Seal of Approval for Audiences 18+.

About “Mastering Life Ministries”: For 30 years, Pure Passion Media has been creating teaching resources for sexually bound and broken people as well as for equipping the saints to more redemptively minister to those who struggle in this way. Their radio, TV, and film productions have won over a dozen Angel, Covenant, Film Festival and Telly Awards. For further information, contact Dr. David Kyle Foster (producer) at [email protected].

To read leader endorsements and film reviews or to watch the trailer, go to: www.TranZformed.org