SpaceX founder and Tesla co-founder Elon Musk is not pinning his hopes on God’s plan for a new Heaven and a new Earth.

He is offering an astonishing and remarkably detailed Plan B: to escape the confines of Earth before the apocalypse arrives, colonize Mars, and eventually move out to other planets and stellar bodies in the far reaches of our solar system.

Musk sees two paths diverging in the years ahead. “History is going to bifurcate along two directions: One path is we stay on Earth forever, and then there will be some eventual extinction event — I don’t have an immediate doomsday prophecy — but eventually…there will be some doomsday event,” he declared.

“The alternative is to become a space-faring civilization and a multi-planet species, which I hope you agree that is the right way to go.”

He delivered these remarks in a 63-minute talk, “Making Humans a Multi-planetary Species” before the 67th International Astronautical Congress in Guadalajara, Mexico on September 27th.

From a secular perspective, it might be considered one of the most momentous talks in human history. The audience greeted Musk like a rock star, interrupting his remarks on numerous occasions with boisterous cheers as they began to grasp the enormity of his daring plan for humanity’s future.

His plans are so detailed and so far along in the implementation, they cannot be dismissed as the wild musings of someone obsessed with sci-fi fantasy. No, Musk is well on his way to achieving his objective, bankrolled initially by contracts with NASA and his own billions.

“I know that there’s a lot of people in the private sector who are interested in helping fund a base on Mars,” he noted. “And then perhaps they’ll be interest on the government sector side to also do that.”

Ultimately, the mission will be accomplished as a public-private partnership, he said. “I think, as we show that this is possible, that this dream is real, not just a dream — it’s something that can be made real — I think the support will snowball over time.”

A number of factors make Mars an ideal candidate for colonization, as opposed to other alternatives, according to Musk. A day on Mars is 24-and-a-half hours, remarkably similar to Earth.

“We now believe that early Mars was a lot like Earth. (It has) decent sunlight. It’s a little cold, but we can warm it up,” he noted. With CO2, nitrogen, argon, and other trace elements available, plants can be grown by compressing the atmosphere.

Gravity is about 37% that of Earth, so humans will be able to lift heavy objects and “bound around” with greater ease.

Musk believes he will be able to sell a one-way ticket to Mars for $140,000 to $200,000, putting it within reach of many. He says he may be able to lower the cost by reusing booster rockets and spacecraft, refueling in orbit, and producing propellant on Mars.

His propellant plant on Mars will produce methane, technically a deep-cryo methalox – his rocket fuel of choice. The energy source for the plant will be a large field of solar panels.

Musk displayed a rendering of his spacecraft, which he emphasized was much more than an artist’s impression. “The simulation was actually made from the space engineering CAD [computer-aided design] models,” he said.

He imagines a massive fleet of 1,000 or more spaceships eventually orbiting the Earth — a Mars colonial fleet — that would depart en masse like “Battlestar Galactica.”

His spacecraft, made from advanced carbon fiber, is designed to accommodate 100 people, plus carry their luggage and up to a ton of unpressurized cargo per person.

Ultimately, Musk would like to see a million people colonize Mars. If one can only travel every two years, with 100 people per ship, that’s 10,000 trips to reach his ideal population size.

Therefore, it may take 40 to 100 years to achieve a fully self-sustaining civilization on Mars, he believes.

Due to the size of his enormous rocket, it will generate a “tectonic” liftoff thrust of 13,000 tons. “But it does fit on a pad 39A, which NASA has been kind enough to allow us to use, where they somewhat oversized the pad in doing Saturn V,” he noted.

His ship will be powered by Raptor engines, “the highest chamber pressure engine of any kind ever built, and probably the highest thrust-to-weight,” according to Musk.

“The rocket booster, in many ways, is really a scaled-up version of the Falcon 9 booster,” which SpaceX is using to take payloads to the International Space Station for NASA.

“This uses 42 Raptor engines. It’s a lot of engines, but we use nine on a Falcon 9, and with Falcon Heavy, which should launch early next year, there’s 27 engines on the base. So we’ve got pretty good experience with having a large number of engines. It also gives us redundancy, so there if some of the engines fail, you can still continue the mission and be fine.”

The booster will accelerate the spaceship to around 8,500 kilometers an hour. “The booster’s like the javelin thrower — so it’s gotta toss that javelin, which is the spaceship.”

“No booster is needed on the moon or Mars or any other moons of Jupiter or Pluto. You just need the spaceship. The booster is just there for heavy gravity wells.”

In December 2015, SpaceX was the first to send a booster rocket back to a landing pad near the launch site and stick a vertical landing. Four months later, they achieved the same objective on a floating ocean platform.

“We think, particularly with the addition of some thrusters, maneuvering thrusters, we can actually put the booster right back on the launch stand,” he said.

Musk foresees a trip to Mars in 80 days. “Over time, I think we’d obviously improve that, and ultimately I suspect that you’d see Mars transit times of as little as 30 days in the more distant future. So it’s fairly manageable, considering the trips that people used to do in the old days. They’d routinely take sailing voyages that would be six months or more.”

His crew compartment will not be as cramped as previous NASA capsules. “(It) is set up so that you can do zero-g games, you can float around, there’ll be movies, lecture halls, cabins, a restaurant — it will be a really fun to go. You’re gonna have a great time,” he emphasized.

Musk hopes to complete the first development spaceship in about four years, and start doing suborbital flights with that.

If his plans go well, he may be able to land someone on Mars in a decade, but he is cautious about making predictions. “I don’t want to say that’s when it will occur, there’s a huge amount of risk, it’s going to cost a lot, good chance we won’t succeed, but we’re going to do our best, and we’re going try to make as much progress as possible.”

He will attempt to send cargo to Mars using Dragon 2, which is a propulsive lander, within a couple years.

“We want to establish a steady cadence — that there’s always a flight leaving, like a train leaving the station. With every Mars rendezvous we will be sending a Dragon — at least a Dragon to Mars, and ultimately the big spaceship — so if there are people that are interested in putting payloads on Dragon, you know you can count on a ship that’s going to transport something on the order of at least two or three tons of useful payload to the surface of Mars.” 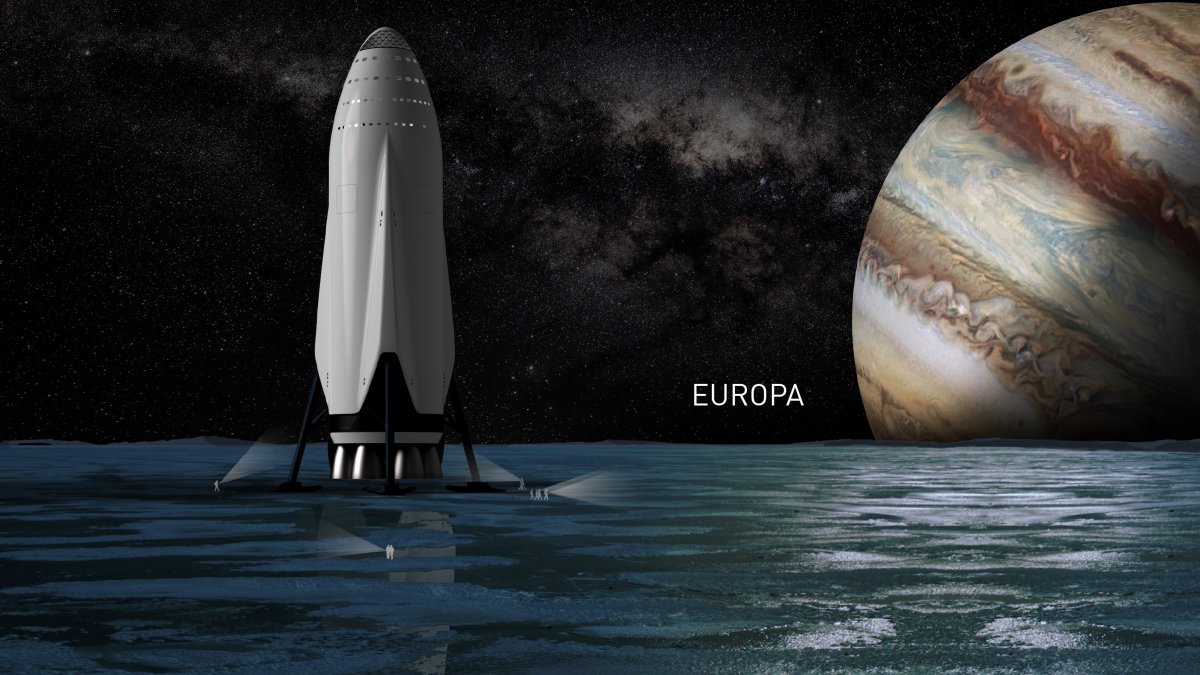 “By establishing a propellant depot in the Asteroid Belt, or on one of the moons of Jupiter, you can make flights from Mars to Jupiter — no problem.”

“It’d be really great to do a mission to Europa, particularly.”