No, I am not referring to Harvey or Irma or any other recent ocean whirlwind that you or your loved ones might remember. I’m talking about a tropical storm that hit the coast of the United States over a hundred years ago, in the year 1876. As far as I know, it was never given a name, but someone should have called it “Faith”—because God used it to move a mountain (well, not literally—but you’ll see what I mean).

I first heard this remarkable account from a worship leader who traveled with me in the ministry. He became aware of the story, because one of his uncles pastored the church for a season—the church that was involved in the amazing miracle I’m about to share.

It was a typical country church—with long, white side-boards and a high steeple—in a quaint coastal community known as Swan Quarter, North Carolina. At some point it was named “Providence United Methodist Church”—I suppose, because of the providential way it finally ‘found’ its place in the world. The people in that region reminisce with travelers who come through the town, calling it, “The Church Moved by the Hand of God.”[i] 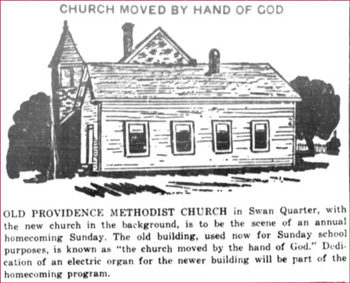 Let me give you the details. In 1874, a group of saints in that waterfront area decided to build a new gathering place for their growing congregation. The leadership felt impressed to place the building on a specific lot, prime property in the main area of town owned by a man named Samuel Slader.

Unfortunately, when they approached Mr. Slader, he adamantly refused to sell them the property. So they reluctantly opted for a different and less-desirable location. Then right before their dedication ceremony, the miracle happened. A hurricane came up the coast and about five feet of water surged through their community. The historical account, verified on the Snopes website, reads:

“During September 16-17, 1876, on the eve of the edifice’s dedication, a hurricane blew through the area. Pamlico Sound engulfed Swan Quarter, sweeping the sanctuary off its foundation. A Providence United brochure tells what happened:

A miracle was happening — the church was floating down the road. The church ‘moved by the hand of God.’ It went straight down the road to a corner and bumped into a general store owned by George V. Credle. The corner is now Oyster Creek Road and U.S. 264 Business.

‘Then a curious thing happened! The building took a sharp right turn and headed down the road for about two blocks until it reached the corner of what is now Church Street. Then it moved slightly off its straight-line course, took another turn to the left, crossed the Carawan Canal directly in front of the place where people desired the church to be, and settled exactly in the center of the Sam Sadler property, the site which had been refused.’ . . .

Before it settled, witnesses said it miraculously rotated around to face the street and there it would stay!”[ii]

Needless to say, Mr. Sadler changed his mind and sold them the property—property the church founders felt God wanted them to have at the start. Can you imagine the shouts of praise that went up to heaven when the congregants found out what God had done? The answer to their prayers gave fresh relevance to an age-old prophecy:

The LORD has His way in the whirlwind and in the storm, and the clouds are the dust of His feet. (Nahum 1:3)

In the wake of the devastation many have faced over the past few weeks, in the U.S. and the Caribbean islands, we should remind ourselves of this verse and ask God to ease the pain, the loss, the hurt by once again using such a tragedy of nature to somehow further His divine purposes in us.

It may be very difficult for those who have lost so much to see past the piles of soggy sheetrock, throwaway lumber and piled-up, useless furniture, but we must believe that somehow, some way, our loving heavenly Father will providentially move for those who believe. If He did it in Swan Quarter over a century ago, He can do it for you today.

Mike Shreve has traveled globally since 1971 as an evangelist with an emphasis on the deeper revelation of God’s Word. He and his wife, Elizabeth, reside in Cleveland, Tennessee. He is an author of 14 books, including “65 Promises from God for Your Child.” His newest book is a study of 52 names and titles God has given His offspring, titled “WHO AM I?”