On a balmy August evening at the Hollywood Bowl – a storied venue filled to the brim with people of many faiths and no faith – Conductor Gustavo Dudamel became an evangelist of sorts as Mozart’s Requiem turned into a megaphone for God’s truth.

It was a rare family excursion to the Bowl for my family on August 24th and our first encounter with Venezuela-born Dudamel, 36, described by L.A. Times Music Critic Mark Swed as “the most accomplished musician of his generation.”

We arrived early, bought picnic dinners, and happened to sit at a table with two Jewish couples that were bright and engaging, steeped in L.A. culture. One of the couples emigrated from Iran during the revolution.

As we sat talking before the performance began, I wondered to myself how it might be possible to plant a seed of truth in their hearts. Little did I know the answer would come soon in an unexpected way.

In 1791, Mozart received a substantial commission for a requiem Mass from a wealthy 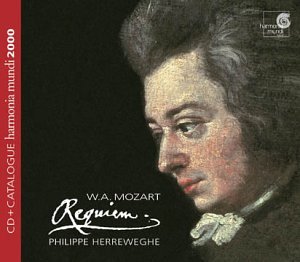 count, Franz von Walsegg. Sadly, Mozart died before he could complete the Mass, but it contains notes scrawled with his own hands during the week he passed into eternity.

Overall, Mozart wrote 60 sacred works. This was his final, sanctified masterpiece and – I was soon to discover – a “last testament” and powerful witness of his faith in Jesus Christ.

In addition to Dudamel conducting the L.A. Philharmonic, he also had the accompaniment of the Los Angeles Master Choral singing in Latin. Since most of the audience does not speak Latin, the English translation was projected largely for all to see.

Here are the words emblazoned for the audience:

and may perpetual light shine on them.

and unto Thee shall the vow

be performed in Jerusalem.

Hear my prayer, unto Thee shall all flesh come.

and may perpetual light shine on them.

Lord have mercy upon us.

Christ have mercy upon us.

Lord have mercy upon us.

Day of wrath, that day

Will dissolve the earth in ashes

As David and the Sibyl bear witness.

What dread there will be

When the Judge shall come

To judge all things strictly.

A trumpet, spreading a wondrous sound

Through the graves of all lands,

Will drive mankind before the throne.

Death and Nature shall be astonished

When all creation rises again

To answer to the Judge.

A book, written in, will be brought forth

In which is contained everything that is,

Out of which the world shall be judged.

When therefore the Judge takes His seat

Whatever is hidden will reveal itself.

Nothing will remain unavenged.

What then shall 1 say, wretch that I am,

What advocate entreat to speak for me,

When even the righteous may hardly be secure?

Who freely savest the redeemed,

Save me, O fount of goodness.

That I am the cause of Thy pilgrimage,

Do not forsake me on that day.

Seeking me Thou didst sit down weary,

Thou didst redeem me, suffering death on the cross. 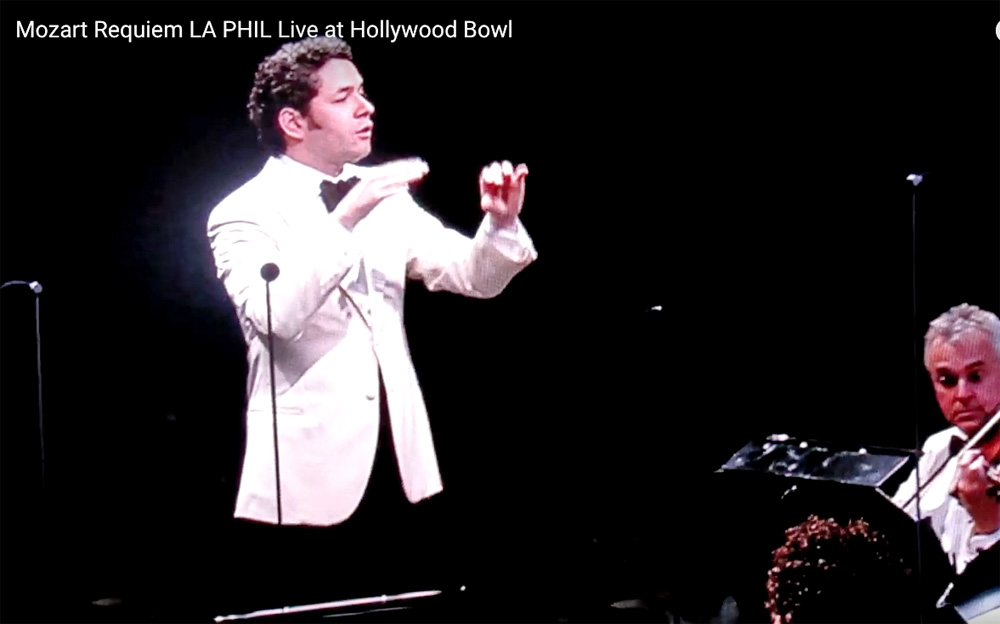 Let not such toil be in vain.

Before the day of reckoning.

Thou who didst absolve Mary Magdalene

And didst hearken to the thief,

To me also hast Thou given hope.

My prayers are not worthy,

But Thou in Thy merciful goodness grant

That I burn not in everlasting fire.

Place me among Thy sheep

And separate me from the goats,

Setting me on Thy right hand.

When the accursed have been confounded

And given over to the bitter flames,

Call me with the blessed.

I pray in supplication on my knees.

My heart contrite as the dust,

When from the dust shall rise

Guilty man to be judged. 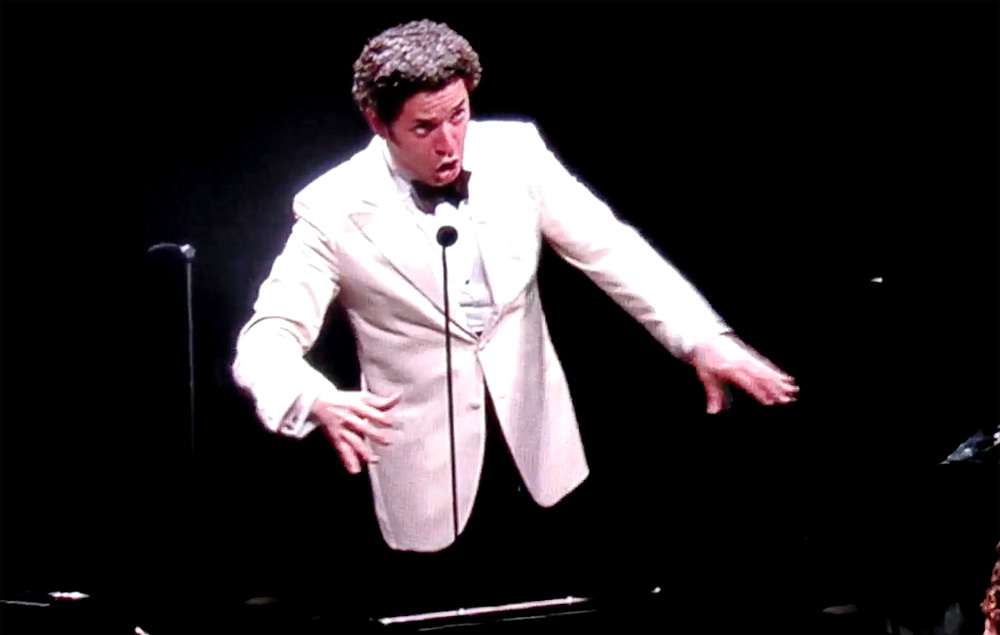 deliver the souls of all the faithful

departed from the pains of hell and from the bottomless pit.

Deliver them from the lion’s mouth.

Neither let them fall into darkness

nor the black abyss swallow them up.

And let St. Michael, Thy standard-bearer,

lead them into the holy light

which once Thou didst promise

to Abraham and his seed.

We offer unto Thee this sacrifice

of prayer and praise.

Receive it for those souls

whom today we commemorate.

Allow them, O Lord, to cross

from death into the life

which once Thou didst promise to Abraham 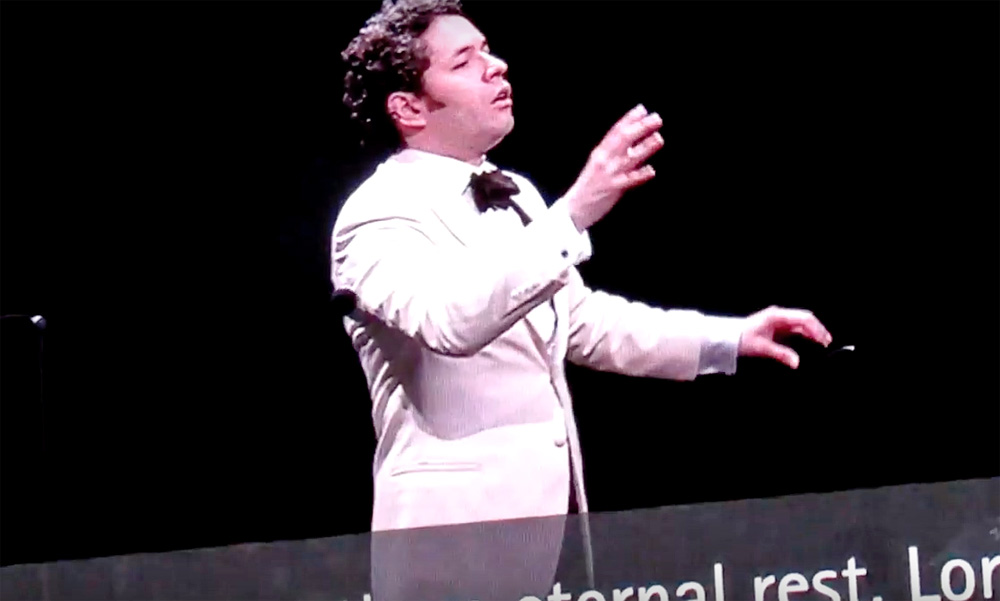 Heaven and earth are full of Thy glory.

Hosanna in the highest.

Blessed is He who cometh in the name of the Lord.

Hosanna in the highest.

Lamb of God, who takest away the sins of the world,

Lamb of God, who takest away the sins of the world,

May eternal light shine on them, O Lord.

with Thy saints for ever, because

and may perpetual light shine on them,

with Thy saints for ever,

because Thou are merciful.

For an audience thoroughly steeped in secular culture, the words may have been jolting to some. It could be argued that such a bold pronouncement about heaven, hell, and the judgment to come would not be preached in many churches today.

But to followers of Jesus like myself, the unexpected mega dose of truth, combined with Dudamel’s masterful and dramatic performance, brought real joy.

It was an evening with “a vector pointing heavenward,” as the L.A. Times critic Swed observed.

“Dudamel, thus, did not, as he tends to do with spiritually intense works, stand still for a full minute or more of silence at the end. This Requiem was over when it was over. But the heavens did this night, as they are not normally expected to do at the Bowl, shake.”