Physicians strongly urged her parents to abort her, because something wasn’t “exactly right.”

“The doctors told us we had ‘options’ five different times, and they was very adamant about it,” Angie Rodgers told The Gospel Herald (GH). “I said, ‘that’s not an option for us. That’s not even a thought in the back of our heads. No matter what you tell us, we’re not aborting her.'”

Little Grace Anna was born with a rare form of dwarfism called Conradi Hunermann syndrome. It’s a rare genetic disorder that may cause cataracts, spinal curvature, sparse hair and scaling of the skin.

After her birth, the little one spent the first six months of life in hospitals undergoing multiple surgeries. She had detached retinas and failed a hearing test.

She was listless for months, which concerned her parents.”For months, she just lay there in the hospital bed,” Angie told GH. “I’d just sit there and stroke her arm and sing to her.”

Then out of the blue, something remarkable happened.

“Grace was around 20 months old, and before she could even speak, she just started singing ‘Amazing Grace’ out of nowhere,” Angie recounted. “She seemed to love it.”

When Angie posted a video of her in 2013 singing “The Star Spangled Banner” it had over 700,000 views. Grace Anna’s Facebook page currently has over a million “likes” and follows.

“She has an amazing ear for music, and it’s really surprising, because she has to wear tubes in her ears,” Angie told GH. “She’s had so many surgeries and health issues, yet she remains so joyful and walks around singing constantly. She just has a love of life and music – and she loves Jesus. She believes wholeheartedly in prayer, that when you pray, God answers.”

Inspired by her daughter, Angie has written a book, “Grace Anna Sings,” published by BroadStreet.

“Nobody really knows everything that she goes through and how her life has touched other people. I wrote this book to let people know that those with disabilities are amazing people. They’re not different; they’re just like you and me.”

“Grace has a big heart, she has hopes and dreams and goals,” Angie added. “She’s brilliant, she has feelings. Her body might look different, but God doesn’t make mistakes. Her little life is just as important as anyone else’s.”

Many have been inspired by Grace’s story. “One of the most special stories was man who was dying, and his wife told us that all he wanted to do in his last moments was watch her videos and listen to her sing,” Angie said. “I cried for days over that.” 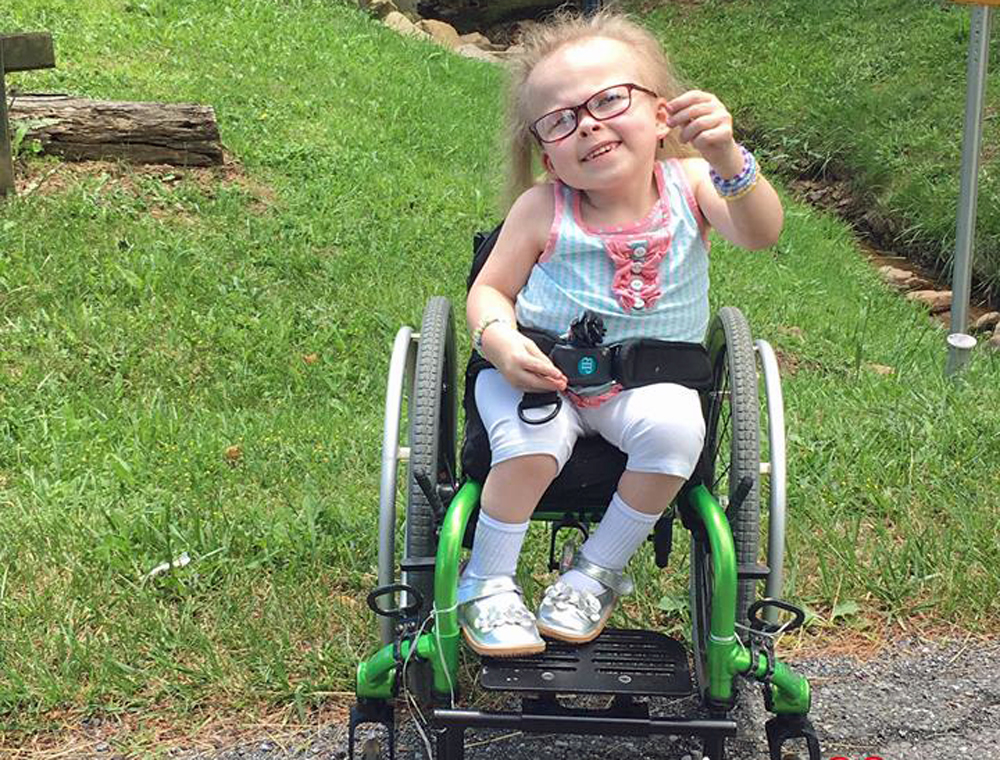 “Before she came along, I would allow petty things to rob my joy,” she told GH. “You see her fight for every little advancement she makes physically. And she’s happy the entire time. She’s doing really well physically, but there are still a lot of hurdles for her to overcome.”

Angie and her daughter’s ultimate hope rests in the Lord. “Have faith, that when you ask God to guide you, He will,” she said. “Rely on His steadfast love and peace to get you through situations.

“You will have a far more enriched life than you’d ever imagined if everything had been fine. That’s exactly what happened to us. Life is so much better now than it was before Grace.”