A pastor who led one of Canada’s largest Korean churches returned home to a Toronto suburb August 12th after being imprisoned in North Korea for more than two years.

His congregation of 3,000 people provided tens of millions of dollars of humanitarian aid to North Korea before he disappeared on a trip there in February 2015.

The government arrested him and sentenced him to life in prison with hard labor for “crimes against the state.”

Rev. Lim spoke to his church the day after his return, describing the conditions of his two-year confinement. Before he spoke, the congregation sang a hymn he wrote while imprisoned. Many in the church wept as they listened to his remarks, according to the Globe and Mail.

“During the winter, I had to dig holes that measured one meter wide and one meter deep,”

Mr. Lim told the church. “The ground was frozen. The mud was so hard that it took two days to dig one hole. It was incredibly challenging. My upper body was sweating. My fingers and toes were frostbitten.”

He broke three metal shovels in his attempts to dig through the frozen mud.

The two years of manual labor aged him as if it had been a decade or more. His thick dark hair was gone, replaced by gray stubble, and his full cheeks had disappeared after his weight dropped from 200 pounds to 140 pounds.

He also suffered from “overwhelming loneliness” during his captivity as he ate 2,757 meals in isolation and worshipped alone for 130 Sundays. But his Lord and Savior Jesus Christ sustained him throughout his ordeal.

While in the labor camp, Mr. Lim read more than 100 books and watched multiple propaganda films about North Korea’s history, according to The Globe and Mail.

Rev. Lim had no way of knowing that behind the scenes a Canadian delegation, led by National Security Adviser Daniel Jean, went to North Korea to work for his freedom on humanitarian grounds. 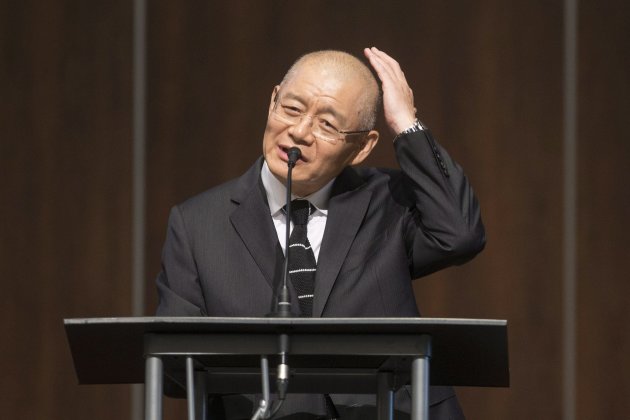 His release happened very quickly and came as a complete surprise to the pastor, with guards only providing a 15-minute notice that Canadian officials had arrived to take him home.

Directing a portion of his remarks at the church toward North Korean leader Kim Jong-un, Rev. Lim denied he ever committed the crimes he was accused of, according to The Globe and Mail.

Mr. Lim made more than 100 mission trips to North Korea before his arrest. The church built an orphanage, a nursing home, as well as a noodle and tofu factory. The church’s aid efforts in the country stopped after the pastor was arrested.

In mid-2015, the pastor made a televised apology for writing biblical phrases and the name of his church on sacks of food, admitting he was part of a conspiracy to overthrow the North Korean government.

Rev. Lim told his church the confession was coerced.

He was hospitalized four times in North Korea and suffered from hypertension and other health issues. North Korea’s KCNA news agency said Lim was released on humanitarian grounds, due to poor health.

The government may have wanted to avoid another tragedy such as befell Otto Warmbier, an American student who died days after being released from a North Korean prison in a coma.