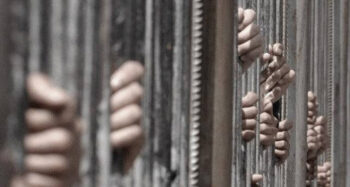 A chilling academic study of the ISIS prison system released August 10th exposes the horrific psychological and physical tortures inflicted by the terror organization in their enforcement of sharia law.

The study was released by the International Center for the Study of Violent Extremism (ICSVE).

The authors found psychological torture that included the threat of execution, solitary confinement, and the placement of severed heads in cages in which detainees are being held.

One female defector who had served with the morality police said, “We would imprison women in the cemetery with skeletons, in a cage in the middle of the cemetery as a punishment. Most of the time when we went back to the cage in the morning, the woman was crazy.”

The Biter is a tool with iron jaws mainly used on female prisoners that resembles large tongs or pliers. Captors often apply the metal jaws to the victims’ breasts causing severe pain.

One former detainee, a 63-year old woman, was on her way to visit her niece in the hospital. She had recently showered before leaving the house with a soap that apparently had a strong scent. In her rush, she forgot to wear a veil covering her face.

As she passed a group of women and men, the men shouted and ran toward her. “They started to hit me with their canes,” she recounted. “I asked them what I did. One man said that when you wear a perfume it is like you have Zina [sex out of wedlock] with every male who smells you. I told that I do not smell. I remember the hand soap might have a scent.”

Women connected to the morality police took her to jail. “In the Hisbah jail they tied me to a chair and uncovered my chest. I cried and begged them to forgive me. One of them [a female ISIS captor] told me to shut up. She then looked at my breast and asked me what happened. I told her I had cancer.

“She told me that she will make the other side look the same. She asked me whether I heard of the biter. I just cried. When she bit me with it I screamed so that maybe all the people in Raqqa heard me.”

Like many detained, one 23-year-old man who had been working for a charitable organization did not know the reason for his imprisonment. After five days in solitary confinement, they took him into a room and removed his blindfold.

“I looked around me; I saw things I had never seen before. There was a man on the floor. He had torture markings and bruises on his face, on his body, everywhere. It looked as though they had just shot him in the shoulder. He was not dead yet. He kept opening and closing his mouth; like a fish out water.

“There was another man; his arms and legs were tied. He was on metal chair. I thought they broke his back. He had burns on his chest and stomach. I did not know whether he was dead or unconscious. The last man was still conscious. His hands were cuffed and hanged on a fixed metal ladder. His feet did not touch the ground. I could see that he was trying to touch the ground with his toes.

“Confess or we do the same to you,” the interrogator told him.

“Brother I do not know why I was arrested. I swear by Allah I did not do anything wrong,” he replied.

“You’re lying,” the man charged. Another man walked up to him and took his shirt off. He poured water on his back and then used an electric stick on him.

“He electrocuted me with it. I lay on the ground and he kept electrocuting me and kept saying that I should confess. I lost consciousness. I woke up in the solitary cell.”

After another three days in solitary confinement they took him to another interrogator. “We know you are getting money from foreigners in Turkey and that the charity work you do is a sham. Tell us everything about the sources of your funds.”

“We accept donations like food and clothes and we just distribute the donations. I told him who worked with me and the names of all of the donors.” The young man was interrogated for over 3 hours.

The morality police occasionally kept women in small animal cages. Sometimes, they threw severed heads into the cages to intensify detainees’ terror. One interviewee, a 32-year-old woman, detailed such abuse:

One woman was placed in a small animal cage next to her, unconscious. “They put a severed head next to the unconscious woman and locked the cage. The woman woke up and pushed herself to the end corner of the small cage, as far as she could from the head. She kept looking around and breathing heavily.

“Then she started to get closer to the head. She turned it towards her so she can see the face. Once she saw the face she started howling. She howled so loudly and for too long. She kept slapping her face as she wailed. They came the next day and took the head away.

The head belonged to the woman’s brother – accused of being an infidel.

“The woman did not eat or speak a word for two days after they removed the head. They took her somewhere; maybe they released or killed her. Nobody told us anything about her; we were scared to ask. I would want to die if I were her.”

metal or wooden boards. The captors often fold the board, bending victims in a variety of L-shape positions. Another position that captors use to maximize pain is carried out by bending the two boards inward and close to each other, according to the report.

“In this V-shape position, the victim’s feet and head are brought close to each other, causing serious, often permanent, injuries to the spine. In that position victims are beaten (often on the soles of their feet) with water hoses, canes, thick industrial cables, and/or are tormented with electric shocks.”

One 37-year-old survivor of the Flying Carpet said his head was so close to his feet they almost broke his back. “It still hurts,” he recounted. “I cannot get up quickly; I need to get myself seated slowly. When they put me on it, they beat me with a cable. Then, they started electrocuting me. They put water first. I do not know how many times they did it before I passed out. I do not know how long they kept me on it. When I woke up I was still on the Bisat.”

One 26-year-old man survived the “Shabeh” (Ghost), one of the most commonly used methods of torture by ISIS. “My hands were handcuffed behind my back. They [the ISIS captors] hung the handcuffs to a rope that dangled from the ceiling and then pulled the other end of the rope. It was so painful it felt that my ribs shattered. I screamed. I was shot once. It was more painful. They kept me in that position for one day…

“When I was there [in that position] they first beat me with a cane, on my chest and on my thighs. One of them started getting the electric prod closer to me and said that he will neuter me. It was so painful that I lost consciousness right away.”

One ISIS defector described one of their unusual methods of execution: “There is a well by the name of Hute. There they cover the eyes of the prisoners and tell them, ‘You are free now, just walk now, but don’t open your eyes.’ They walk and fall into the well. It smells horrible because of all the corpses inside the well. I know that over one hundred people were thrown into that well.”

The report also described the treatment of detainees that ISIS uses as sex slaves including Yazidi women, wives and daughters of captured Free Syrian Army and Jabhat al Nusrah cadres. “These women are either sold or given to foreign fighters, ISIS cadres or outsiders or held in detention facilities in both Syria and Iraq. Those held in detention centers are subjected to repeated rapes by ISIS cadres who are given access to them as a reward for service,” the report notes.

The report concludes that imprisonment and torture are being used as tools “to scare civilians into providing ISIS with material support and ultimately submitting to ISIS’ theological codes and socio-political aims.”

For the full report by ISCVE, go here

Muslim prophecies and the significance of the ‘K’ in ISIS-K