Saudi Arabia is one of America’s most important allies in the Middle East, yet the kingdom’s version of Islam, Wahhabism, is indoctrinating children in the school system in ways that may incite violence against the West.

Nina Shea, a senior fellow at the Hudson Institute’s Center for Religious Freedom, recently testified before Congress about her study of Saudi textbooks for grades 1 through 12 in the religious curriculum.

“Fears that the Saudi government was indoctrinating its young people in violent and belligerent teachings toward us proved warranted,” she testified.

Shea found the textbooks teach an ideology of hatred and violence against Jews, Christians, Shiites, Sufis and Ahmadis, Hindus, Bahais, Yizidis, animists, sorcerers, and “infidels” of all stripes, as well as other groups with different beliefs.

“Christians, Hindus and those “practicing witchcraft” are to be fought and killed,” according to the texts.

While most would consider Christianity one of the three great monotheistic religions, “the Saudi textbooks teach that Christians are polytheists for their belief in Jesus Christ. Christians are also considered ‘infidels’ who must be fought unless they have a protection contract with Muslims.”

Shea testified that the Saudi government has dragged its feet about reforming the texts, 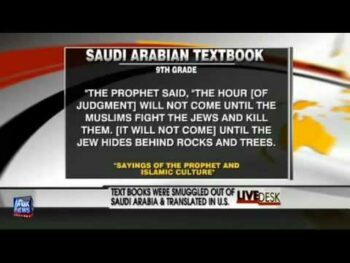 “Each year, these textbooks directing religious hatred, violence and war indoctrinate six million Saudi students and reach untold millions of others as they are spread far and wide in the Muslim world by a state that claims moral authority as the custodian of Islam’s holiest sites.

“Since 9/11, the State Department has barely raised the issue and at times has even worked to cover up their toxic content. It has not held the Saudi government to its repeated promises to the United States to reform its textbooks.”

The schoolbooks direct their greatest venom toward the Hebrew people. “No group, however, is more vilified than Jews,” Shea testified. “Repeatedly, Jews are demonized, dehumanized, and targeted for violence. The textbooks instruct that the Zionist aim is ‘Jewish domination of the world and controlling its destiny.’ Israel’s existence is de-legitimized and students are mentally prepared for eventual war with the Jews. All of Israel is called “occupied Islamic territory” (as are Romania, Bulgaria, Greece, much of Spain and the Balkans.)”

One schoolbook stated: “The Apes are the people of the Sabbath, the Jews; and the Swine are the infidels of the communion of Jesus, the Christians.”

In 2011, Shea met with the then-Saudi justice minister Muhammad al-Issa, and asked why the Protocols of the Elders of Zion, an infamously anti-Semitic fabrication from the Russian revolution period, is taught as historical fact. He told her the Protocols is part of Islamic culture, has long been found in plentiful supply in Saudi Arabia, and was a book that his father had in his home.

“Top U.S. Treasury counterterrorism officials have called the Wahhabi teachings of these textbooks ‘kindling for Bin Laden’s match,’ and warned that, without education reform, ‘we will forever be faced with the challenge of disrupting the next group of terrorist facilitators and supporters.’”

Incredibly, the New York Times has reported that the same Saudi texts were used by ISIS for teaching children in Mosul’s schools.

Shea called on the State Department to conduct an annual review and publicly report on the textbooks.

Moreover, she said that American defense contracts with Saudi Arabia should be halted as long as the Saudi government “publishes, approves, finances or distributes textbooks that direct violence and hatred against any religion or group that may include American citizens.”

She said the U.S. should apply diplomatic pressure toward Saudi officials and their families, to press Saudi Arabia, to remove intolerant passages from school textbooks and other educational materials.