Her parents were secret Christians in a society where any public expression of faith leads to imprisonment and possibly death. When she stumbled on their closely held secret as a young girl, she almost turned her own parents into the authorities.

“Like so many Christian families, our family was banished in the 1950s to a remote village,” Kim Sang-Hwa* told Open Doors. “They continued to hide their faith from the outside world.”

Their house was very small, and they all slept in the same room. When she was six-years-old, she woke up earlier than usual one morning. “When I opened my eyes, I saw my father and mother under the blanket and I could hear the soft noise of the radio. Later I learned they were listening to a broadcast from a Christian radio station,” she recounted.

A few years later she made an even more dramatic discovery. “When I was 12, I accidentally found a Bible my parents had hidden in their closet. I don’t know why, but I started to feel inside the cabinet with my hand, pulled out a book and began to read.”

Because of her schoolteachers’ indoctrination, she realized her discovery was dangerous and she was obligated to tell her teachers about the illegal book.

“I was afraid to touch the Bible, but I couldn’t just leave it there. I closed my eyes, picked up the book and put it back. I weighed my options. Should I tell my teacher? Should I visit the local security official? For 15 days I couldn’t think about anything else. I knew it was my duty to report this illegal book. But it was my family which was involved. And I also had all these questions: ‘Who is this God? Or ‘what’?’”

Finally, she summoned the courage to confront her father. “He was very surprised and sat next to me. He asked me: ‘Do you see those old trees?’ I nodded. ‘Who made those?’ I said I didn’t know and he explained the story of creation to me, including how God had made Adam and Eve.”

My mother taught me to memorize Bible verses and the Apostolic Creed and also explained the full Gospel to me. My grandfather showed me how to pray. ‘It is just talking to God. Nothing more, nothing less.’ He spoke a lot about Jesus’ Second Coming. He really longed for that.

“To me all those stories and ideas were so interesting. I also read the Bible for myself. But I realized it was dangerous. My father always emphasized not to share anything with anyone else. Then he would start to pray in whispers, almost inaudible. ‘Father, help the North Korean people to seek your Kingdom first’.”

She learned that her father met people in secret location, as part of the underground church. “Many children of believers came to that location too and learned the Bible. We prayed together.”

But Sang-Hwa and her parents were unaware that government agents had infiltrated the underground meetings. “Among the people visiting the secret meetings were some non-believers too, even spies,” she told Open Doors.

When one of those visitors was dying, her father went to see him on his deathbed. The 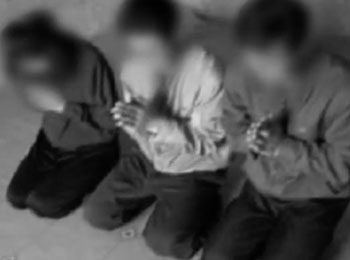 man confessed his duplicitous intentions: “I know everything about you, your family and your faith. I was a spy and ordered to watch you,” he told her startled father.

Amazingly, the government agent never turned them in. As he observed the believers praying and singing, his heart softened toward them.

“You are a good man. I never told anyone you were a Christian,” he told Sang-Hwa’s father. “Tell me how I can become a Christian too.”

With his feet dangling at the edge of a Christless eternity, something amazing happened. “In the final moments of his life, this man repented and entered the Kingdom of God. My father was able to lead him there.”

After Sang-Hwa married, she and her husband became more and more discontented with life in North Korea. “Out of every three people, at least one of them was a spy. We always needed to do what we were told and my father was pretty open about how bad our country really was.”

Because of her father’s success in his work and help from relatives in China, her family was relatively better off than their neighbors, which caused them to be denigrated as “followers of capitalism.”

Afraid for their safety, Sang-Hwa and her husband, along with their two-year-old son and her parents, fled the country.

One dark night in the early 2000s her family crossed the border river into China. Life as refugees was difficult and they suffered at first. “That first year in China was probably the hardest, but there were also good things. At some point, Chinese Christians took care of us and my husband also gave his life to Jesus and after one year we were able to pay a broker to bring our son back from North Korea to us,” she recounted. 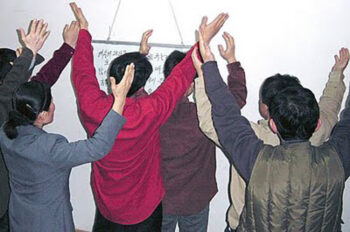 Sang-Hwa enjoys her newfound freedom, but her heart is for the people suffering in the north. “I wish I could go back to North Korea and share the Gospel with the people there and have fellowship with the local believers. I love their faith. I’d be ready to die for the Gospel. I think that if I didn’t have a family here in South Korea, I would have returned already and help the people in need.”

“My father always told me to seek the Kingdom first. That will always be his prayer for his country and all believers. This is what I pray in the morning when I kneel at the map of North Korea on the floor of my house and pray for the brothers and sisters.”

Sometimes she feels discouraged because nothing seems to change in North Korea.

She asked God, “Why do you want me to keep on praying for North Korea?”

But then God impressed this on her heart: You know North Korea better than anyone else. You know the people and their suffering. If you won’t pray, who will? Rely on Me. Believe in Me.

For more about the work of Open Doors on behalf of persecuted Christians around the world, go here