His high-energy comedic impressions approach the level of genius and have gained him a worldwide following, ever since he starred in Ace Ventura: Pet Detective and Dumb and Dumber in 1994.

Carrey’s spiritual journey has taken him in many directions, but at a recent visit to a charity helping the poor in Los Angeles, he made explicit references to Christ’s suffering on the cross that may signal a shift in his thinking.

Born in Ontario, Canada, Carrey was raised Roman Catholic by parents with French Canadian ancestry. He dabbled in Presbyterianism later in life, but also told Oprah Winfrey in 1997 that he is an advocate for the law of attraction.

He told Oprah that early in his career he used visualization techniques to get work. He imagined a $10,000,000 check given to him for his acting service and seven years later received a check in that exact amount for his role in Dumb and Dumber.

Carrey remains an ardent proponent of Transcendental Meditation, and seems to credit the practice for helping him to overcome depression and remove himself from Prozac and all other drugs, including coffee.

In 2010, he told 60 Minutes, “I’m a Buddhist, I’m a Christian, I’m a Muslim, I’m whatever you want me to be. It all comes down to the same thing. You’re in a loving place or you’re in an unloving place, if you’re with me right now you cannot be unhappy, it’s not possible.”

In an appearance there last month, Carrey made some unambiguous references to his Christian roots.

“I’ve had some challenges in the last few years myself,” Carrey admitted to a room packed with former gang members. “Ultimately, I believe that suffering leads to salvation. In fact, it’s the only way.”

Carrey spoke of his own path in dealing with trials. “Somehow we have to accept and not 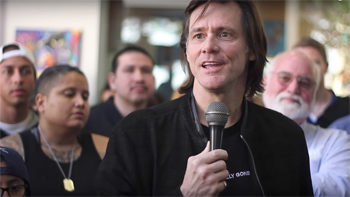 deny, but feel our suffering and feel our losses and then we make one of two decisions.

“You made the decision to go through the gate of forgiveness, which leads to grace, just as Christ did on the cross. He suffered terribly and he was broken by it to the point of doubt and a feeling of absolute abandonment, which all of you have felt.

“Then there was a decision to be made, which was to look upon the people causing that suffering with compassion and forgiveness. That’s what opens the gates of heaven for all of us. 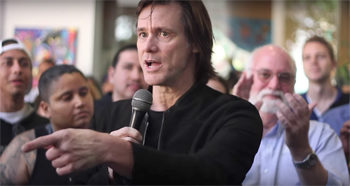 With Father Boyle looking on approvingly, Carrey said he sensed God’s presence in the room. “I want to speak to the fact that I believe this room is filled with God.”

The traditional Christian view is that God is present everywhere in His creation, but He is also distinct from His creation. 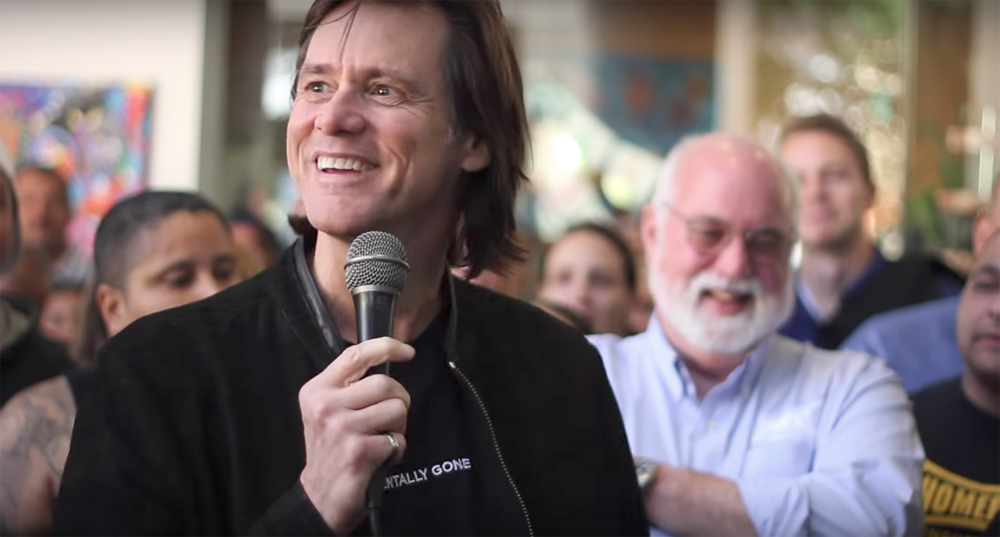 Carrey went on to say that meditation had allowed him to find a measure of peace – to turn off “the show” going on in his head.

“Meditation for me and a lot of people has been a way to turn that off or recognize that those thoughts are just thoughts. Like clouds that pass the sky, they will pass on and gently pull yourself back to the place of peace, just to stop the spiral of thought.”