Imie and Amy Mark consider themselves “expendable for the King” in their service as missionaries in Papua New Guinea with Ethnos360.

Amy, and their two youngest children, had the opportunity to spend part of their spring break in North Wahgi visiting another of the missionary families affiliated with Ethnos360 ministering among the people there.

During their visit, they learned about recent fighting that had broken out between two neighboring villages. Sadly, hostilities began over a refusal to lend less than $2 and escalated into an all-out battle between the villages, Imie recounts on their blog.

To escape the fighting, some people in one of the villages came to stay with the missionary family Amy was visiting. While they were there, they were invited to hear the Foundational Bible Teaching (where they teach through Creation to Christ to present the gospel in the full context of the whole of Scripture). 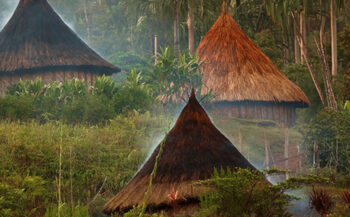 The power of the Word and the Spirit touched several who were there. “Two of these men believed and became new brothers in Christ!” Imie reports.

“They went back to their village and told their families and others that they needed to hear this teaching because it is unlike anything they had ever heard.”

While Amy and the children were there, they learned that one of the new believers, Wallup, had been diagnosed with terminal liver cancer.

Immediately they went with other believers from the North Waghi church to visit Wallup and his family in their home.

“The missionary told the family that he knew they would want to blame someone for his death (he didn’t know it, but some were already planning to blame the man’s second wife),” Imie recounts.

“He went on to explain that these things happen because sin entered the world with Adam and Eve, and though the believers there were sad that Wallup was dying, they knew where he would go. He would be with Jesus, but that was not true for the rest of them. He told them that they wanted to bring the teaching to them and encouraged them to listen.”

Only a few days later, Wallup went to be with Jesus. “We are thankful that the end came quickly for him as there is no hospice care here, but even more thankful that he was a believer,” Imie notes.

“The North Wahgi church is planning to resume an outreach to this area… please pray with us that many will attend, listen, and respond to the Gospel.”

To learn about the Marks’ work with Ethnos360, go here