Both moms were convinced that pregnant 15-year-old Diana wasn’t old enough to be a mom. They thought she would be dumping off her baby for either mom to raise, and neither wanted the duties. The solution was obvious and logical.

The young teen received an ultimatum: get an abortion or move out.

Pressured and confused, not knowing any options, Eric and Diana – naturally – scheduled the appointment to terminate their unplanned pregnancy. No one would ever know – and not because they lived in Las Vegas, but because that’s the way abortion laws work.

But a funny thing happened. The nurse called Diana’s name once, then twice over the public address system. It was time to hand over the money and terminate the pregnancy.

They stood up together and skipped out.

Just this June, Bianka – a strikingly beautiful teen with pink rose petal cheeks – graduated from high school in the San Fernando Valley. She’s planning to earn a teaching credential. She cares for her four younger siblings. And she broke the cycle of teenage pregnancy. She’ll wait until marriage. Now, for the parents, it’s inconceivable that she almost didn’t come into existence.

How Eric and Diana met and fell in love is not the plot line of a fairy tale. He was running from police hot in his neighborhood. A gangster, Eric saw patrol cars prowling his neighborhood, and he figured the cops were looking for him.

When some acquaintances cruised past, he jumped in front of their car and asked for a ride. His buddy was with him and remembered a certain señorita in another neighborhood at whose house he figured they could hang out.

That’s where Eric saw the dark brown eyes of Diana. He had time to kill, so he tried to strike up a conversation with her. It was no easy matter because she spoke Spanish exclusively.

Of mostly Hawaian descent, Eric didn’t know much Spanish. What he knew was the rough lingo of the streets where words were used to steal cars and fight rivals.

So what sparked the romance? Cupid’s arrow smote not “in spite of” but “because of” the communication barrier. She could only understand the most rudimentary English, and he had to be careful not to use street Spanish laced with expletives.

It was a challenge to get to know each other, and the challenge made it an adventure. The difficulty of conquering Diana was part of the attraction. 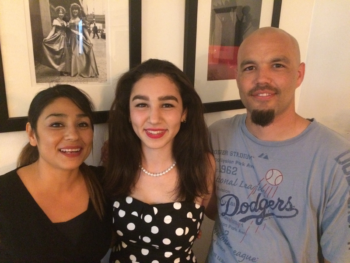 It was a challenge also because she was dating someone else – a fact she tried to communicate to Eric to throw water on his evident interest. He either didn’t understand or didn’t care.

Eric kept visiting the dark-haired beauty secretly. Sometimes, he would tap on her window after midnight, and they would talk – or TRY to talk.

Their romance had all the precursors of an unwanted pregnancy. He was 17, a mere two years older.

“One of our moms told us to get an abortion, but I had a feeling come upon me not to do it,” Eric said.

Uncertainty prevailed in Diana’s heart. “I felt cornered. I had only known my husband for six months. My mom felt she was going to end up raising my baby, so she said, ‘Either get an abortion or move out.’ To me, I kind of didn’t even know this guy, so I only saw the option of going through with the abortion.”

The night before the appointment, Diana woke up, hearing a baby cry. The sound wasn’t coming from her home or her neighbor. It was lucid.

“I don’t know if it was a dream or a real voice of the baby from in my womb, but I could hear a baby crying. It woke me up, and I couldn’t even go back to sleep. I just waited until morning for the appointment.”

The clinic was a “cold” place, and Eric and Diana waited stolidly for her turn. They didn’t talk.

“I thought, ‘This is it. I’m going to get an abortion,’” she recalled. “My husband and I held hands and we looked at each other and we stood up and walked out of that place.”

They had no plans.

“I didn’t know what I was going to do,” Eric said. “I just said, ‘God’s going to have to help us.’” Eric wasn’t a believer in God at the time. He didn’t go to church. His parents didn’t teach him the Bible. Where did he get “God” from in his moment of need?

Since Diana was kicked out, Eric went on the bus to bring Diana – with her clothes packed in trash bags – to his home, where his mom would receive her. He applied for and got a job immediately.

After a year-and-a-half, they moved out. They were a fragile family, destined according to statistics to fall apart. Such unions – started quickly and carried to consummation without much thought – tend to fall apart. The man realizes she’s not Mrs. Cleaver from “Leave it to Beaver.” The woman looks to trade up for a better bread-winner.

But Eric and Diana defied the odds. Bianka’s birth instilled a measure of seriousness into Eric. He still continued to drink, but he held a job and stayed by Diana’s side.

In 2005, a friend invited them to church, the couple answered an altar call to receive Jesus and they decided to make their de facto marriage into a legitimized union. Today, they are leaders in the Lighthouse Church in Van Nuys.

It was bewildering to face a future of poverty, of uncertain marital stability, to gamble in favor of life. To walk out of the clinic was daunting.

“It was the best decision of our lives,” Eric said.

Perhaps the happiest of family that Eric and Diana didn’t abort is Bianka herself.

“It’s not the baby’s fault that the baby should be punished,” Bianka said. “I’m glad my parents had me, otherwise I wouldn’t be here.”

Pregnant and desperate? Click her to find out about resources to help.