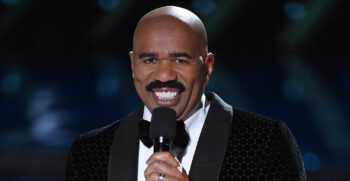 In school, Steve Harvey never got an A and never got a star. So when in high school the teacher called him to the front to share his life goal, he thought he would FINALLY get a congratulation of some sort.

Instead, he got ridiculed for saying he wanted to be on T.V.

“She called me up there to humiliate me. She knew I stuttered severely,” the famous comedian shared at an Alabama State University commencement ceremony. “She said, ‘Why would you write something like this? Who in this school ever been on TV? Who in your family ever been on TV? You can’t even talk right. You ain’t gonna be nothing.’”

But Harvey turned the humiliation into a life lesson.

“Every Christmas I send her a flat screen TV because I want her to see what God had done for me in spite of everything she had said about me,” he said. “God put your imagination in your mind to show you a preview of what He has for you. If you want to kill your big dreams, tell it to a small-minded person.”

As his comedic stardom continues to grow, Harvey is becoming increasingly vocal about his Christian faith.

“My momma and my daddy left me empty-handed, but boy the church they put in me! The God they put in me!” he said. “My life is full of grace. You better go get yourself some. You can’t buy grace. It ain’t for sale. If I take all the money you have – and thank You Jesus, I got some money – I would take all of it and buy grace with you, but you can’t. It’s free.” 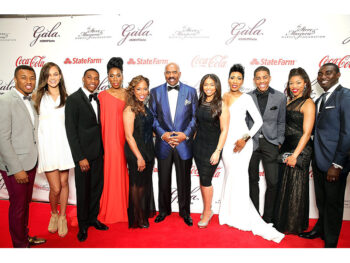 Harvey was born in Welch, West Virginia in 1957 to a coal-mining father who taught Sunday school.  His father taught him to be a man of his word. The family moved to Cleveland, where he attended Glenville High School. He jokes that he graduated 690th out of 695 seniors.

In his early years, Harvey found employment as an auto-worker, insurance salesman, a carpet cleaner and a mailman. While getting his comedy career going, he was homeless for several years, slept in a 1976 Ford, and showered at gas stations and public swimming pools.

In 1990, he gained attention as a finalist in the Johnnie Walker National Comedy Search. Eventually, he landed the long-standing job as host of It’s Showtime at the Apollo. He later starred in ABC’s Me and the Boys in 1994 and ran The Steve Harvey Show on WB network from 1996-2002.

In 2010, he boosted Family Feud’s ratings as their host.

Meanwhile, the Atlanta-based T.V. show host struggled through two divorces and had four children. He’s on his third marriage to Marjorie Bridges, whose three children he treats as his own.

“I’ve lost everything I’ve ever owned twice,” Harvey summed up his life. “Struggled through two marriages to finally learn to get it right. I lived in a car 3 years, washed up behind bushes at the gas stations.”

His latest marriage is largely responsible for shaping him up, he said.

“You’re looking at two people who were messing up for real and making bad decisions without conferring with God,” he said on Tlcnapttown’s website. “But the fact that you can mess up that many times and still come out okay is a testament to just the grace and mercy of God, man.”

In 2015, Harvey was praying for God to increase his audience overseas. How God hearkened to that prayer became another life lesson about trials and blessings.

It happened through his famous Miss Universe blunder. Hosting the pageant in the Philippines, he was fed through the teleprompter the wrong name. Miss Colombia, Ariadna Gutierrez was overcome with emotion and adulation, but Harvey found out backstage it was a mistake. The winner was Miss Philippines, Pia Wurtzbach.

As organizers were scratching their heads wondering what to do, Harvey walked out on the stage and owned the error. His correction crushed Miss Colombia and prompted a gazillion memes making fun of Harvey. He apologized to both and laid low for a time, even though the organizers were responsible for the mistake. 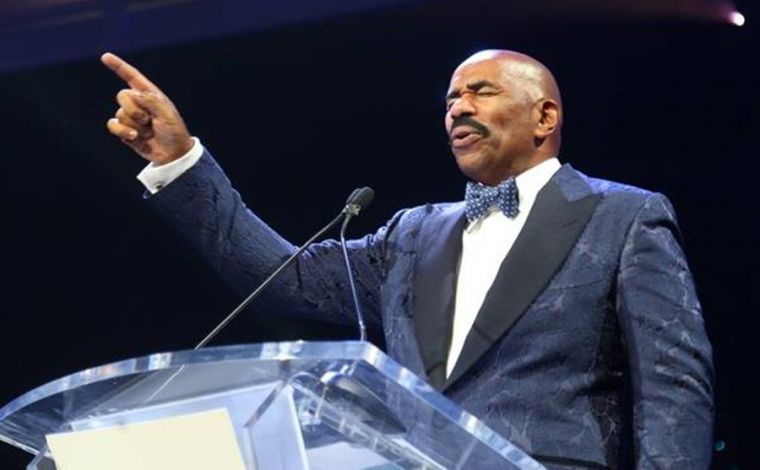 While the faux pas caused no end of embarrassment to Harvey, it also raised his international profile and increased his business. That’s the way God works, he said.

Today, his company has a net worth of $100 million.

Harvey overcame the stuttering and didn’t let his high school teacher’s dire predictions hold him down.

“The whole funky truth about how to get from the back to the front, how to get from the bottom to the top. My life ain’t covered, my life is smothered by grace. That’s all I am,” he said. “Grace is not passed out by y’all. Y’all can’t figure it out. What God got for you, nobody can figure out.”

Jordan Sheppard is a student at The Lighthouse Christian Academy.