With a missionary’s zeal, Rebecca Gomperts promotes abortion in countries where it’s illegal. She believes she’s saving the planet from overpopulation, women from unsafe procedures and democracy itself.

In 2001, the Dutch doctor founded Women on Waves and sailed to Ireland with a plan to take pregnant women aboard, sail 12 miles offshore into international waters, administer abortion pills, then sail back to harbor as a means of protesting anti-abortion laws.

She hit a snag when conservatives in Holland, under pressure from the European Union, said she wasn’t licensed. She returned home amid reports that her mission was a publicity “sham.”

But Gomperts didn’t give up. She fund-raised and sailed again – to Poland, Portugal, Spain, and Morocco. 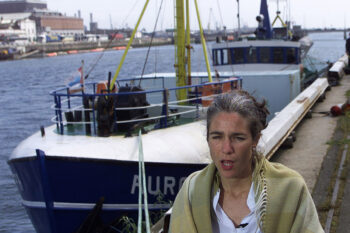 In February, her abortion boat was chased away from Guatemala. “The boat of death has arrived in Guatemala,” Congressman Raul Romero groaned, and President Jimmy Morales ordered the Navy to block abortion advocates from disembarking and prevented Guatemalans from boarding.

“What she is doing is essentially a protest worldwide. They go around to countries that limit access to abortion as a publicity stunt,” said Cheryl Sullenger, senior vice president of Operation Rescue. “I think it’s extremely dangerous. They bring people out to the boat and give them an abortion pill and send them home and the abortion boat leaves. There’s no follow-up care. 6-7% of women who take this pill need surgical intervention after. It’s really irresponsible.

“They kill innocent children and leave women vulnerable. They just want to make a point, and they don’t have the best interests of the women in mind.” 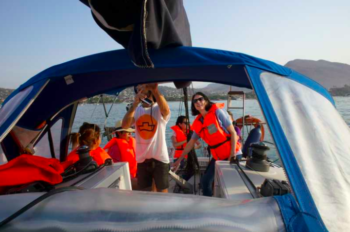 If you read about Gomperts online, media accounts lionize her. She was made into a hero by the 2014 film “Vessel.” She is portrayed as persecuted, brave and altruistic. Stories read eerily similar to accounts of missionaries preaching the gospel in danger of their lives and hounded by hostile people groups.

And she’s been successful. When she was blocked by two Portuguese warships from entering harbor in 2004, she countered by appearing on television. She portrayed herself as the victim and women as victims. Abortion was the answer to patriarchal oppression, she said.

When a participant on TV questioned the legality of her work, she retorted, “I really think you should not talk about things that you don’t know anything about. Concerning pregnancy, you’re a man, you can walk away when your girlfriend is pregnant. I’m pregnant now, and I had an abortion when I was — a long time ago. And I’m very happy that I have the choice to continue my pregnancy how I want, and that I had the choice to end it when I needed it.”

Within two and half years, Portugal legalized abortion, the New York Times reported.

In reality, her boat – it’s now a small sailing yacht when once it was a 100-foot fishing vessel – performs very few abortions – maybe only a dozen on each trip. Women set up appointments online or by calling a hotline. They board the ship, sail to international waters where Dutch law governs the ship, then take misoprostol and mifepristone which induce miscarriage. The process is painful and prolonged as cramps come upon the woman for hours prior to the baby’s death.

“It’s very symbolic ― it’s more about highlighting the consequences of unsafe abortion,” said Leticia Zenevich, spokeswoman for Women on Waves. “Even if the number of women the boat helps is not big, women get access to information: that there is a pill they can take, that abortion is a health service.”

Eventually, Gomperts wasn’t satisfied with just making a symbolic protest. She wanted to get more abortion pills into the hands of more women.

In 2015-16, she availed herself of emerging technology and sent pills into Ireland and Poland via drones. Church Militant touted the stunt as “murder from the sky.”

She set up Women on Web in 2005 to mail-order abortion pills into 70 countries where abortion is restricted. Call it “murder by mail.”

According to her own website, she attends to more than 100,000 emails yearly from all over the world. She’s shipped pills to Costa Rica, Malta, Pakistan, New Zealand, Chile, India, Uganda, Ireland, Brazil, South Korea, Saudi Arabia, the United Arab Emirates, Poland and, Algeria, according to the New York Times.

Women on Web counsels clients how to not get caught by local authorities for inducing abortion, the Times reported. They instruct women to ingest the pills in her mouth, instead of vaginally. This will make all traces dissolve, so that it can’t be detected by police.

“Women shouldn’t be afraid to look for care when they need it, and at the same time they shouldn’t do anything to incriminate themselves,” Gomperts said in the Times.

Online respondents fill out a questionnaire and say they’ll take the pill under the supervision of a doctor. Article after article cites World Health Organization statistics that provide numbers of “unsafe” illegal abortions worldwide, but Sullenger disputes those statistics.

“They’re fake numbers,” Sullenger said. “They have an abortion agenda. I wouldn’t trust their numbers anymore than I trust the numbers that were used to support Roe vs. Wade. Those were numbers shown to be faked.”

Gomperts was born for activism. She got her start on a Greenpeace vessel, the Rainbow Warrior II. As the resident physician aboard, she came across a case of a woman who died from a botched, illegal abortion.

“I could not observe that and just let it happen,” she says on the Democracy Now website. “So we built a mobile clinic so we could sail to international waters and legally help women with safe abortions.”

It became her own personal war.

“Welcome Nazis!” pro-lifers charged when she arrived in Poland. She didn’t flinch.

When she arrived in Spain, her fellow abortion advocates passed out matchbooks with a photo of a burning church, subtitled, “The only church that brings light is the one that burns. Join us!” She wasn’t afraid of polemics.

In all of her rhetoric, she expounds on the rights of women and the woman’s body. She makes no mention of the baby’s rights or body. In that dialectic optic, she’s a savior of the world, battling the imperious caveman governments that deny citizens their basic human rights.

When the Zika virus broke out in Latin America and it was discovered that unborn were particularly vulnerable, she scheduled a new trip. Guatemala, which prohibits abortion except when the mother’s life is in danger, was selected.

“The Zika crisis made it very clear once more that abortion is a matter of social justice,” said Leticia Zenevich, spokeswoman for Women on Waves. “Poor women are denied a spectrum of health services, including safe abortions. We respect religious beliefs but this is a fundamental right in a democracy.”

President Morales shut down her mission, saying he would defend “human life and the laws of our country.”

Undeterred, the abortion boat sailed directly to Ixtapa, Mexico, where it anchored off the coast and began peddling abortions. Abortion law varies among the 31 states of Mexico; it has been legal in Mexico City since 2007. In three days, 70 women called their hotline to inquire, the Huffington Post reported.