His parents were orthodox Hindus and his family worshipped many idols. Despite their strict adherence to many rituals, there was neither blessing nor peace in his family.

“We began to really struggle due to living in acute poverty and it was made worse when my father began to abuse alcohol,” Mihirkanta Digal told Biglife. “As I grew older I began to think more about our situation and found it strange that we had no peace, yet we faithfully worshipped idols,” he said.

Searching for answers, Digal contacted a Hindu leader. “He told me that if I followed what he said to do I would experience peace and blessing in my family. I was very encouraged to hear this and asked him to please tell me his secret to success.”

The man told Digal he must dig a cave in the cemetery and for 21 straight days (starting at midnight) recite Hindu prayers 108 times, while inside the cave.

Additionally, Digal was told he must take a bath at the local river before entering the cave. “He also told me that to gain peace I should worship the goddess Saraswati and to gain blessing I should worship Krishna during my time in the cave. At the end of 21 days the gods would appear to me in a dream and would ask what blessing I desire.”

When Digal heard this prescription for peace he was elated and began to carefully prepare all the materials the man described.

“I followed his directions faithfully every night for 21 days,” he told Biglife. “On the final night I had great anticipation. I stayed awake all night long until the morning, yet nothing appeared to me. Finally, I returned home disappointed and discouraged.”

Soon, Digal says he was attacked by demonic spirits and his body got weaker and weaker. “I tried many ways to find a cure, but nothing was helping. My family was very upset about my condition because it was affecting my studies,” he recounted.

But God saw him in his distress and in His great mercy arranged for Digal to meet a Christian.

“He introduced me to Jesus and prayed for my condition. Through his prayers, the Lord delivered me from the demonic attacks and I felt completely refreshed.”

Confronted by the truth of the Gospel, the Word and the Spirit moved on his heart and Digal gave his life to Jesus Christ. He was baptized immediately.

“After accepting Jesus, my life took a huge turn for the better and I had the peace I had always sought. However, I come from a very poor family. When my father came to know I had become a Christian, he was very upset. He was concerned that once the other villagers found out they would drive us out of the village. So my father asked me to leave our home.”

Even though he was rejected by his family, Digal could not turn away from Jesus. Moving away to attend college, he felt compelled to share with others the peace that God gave him.

After college he returned home. “By the grace of God I began to share Jesus and 13 families were saved. 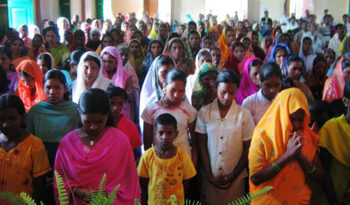 In 2014 he met a pastor affiliated with Biglife, who began to disciple him. “He shared with me a vision and mission that made me very excited. I have been pouring what I learn into others.”

The Lord raised up a team of laborers and Digal has been involved in planting 210 house churches. With God’s help, he hopes to reach his entire region with the Good News of Jesus Christ.

If you want to know more about a personal relationship with Jesus, go here