Kevin Hart’s mother was going to help him with rent to kick-start his comedy career, but when the due date passed he called his mom, and all she could say was: “Have you been reading your Bible?”

A week later it was the same thing: “When you read your bible, then we’ll talk about your rent.”

Annoyed at his “over-religious” mom but desperate about an eviction note on his door, Kevin grudgingly sat down and opened the Good Book.

“I go home and say, ‘Man let me open this Bible up,'” Hart explained to Oprah Winfrey. “Open the Bible up, six rent checks fell out. She put all my rent checks in the Bible.”

Score one for mom and the Lord!

Hart, the self-spoofing star of Real Husbands of Hollywood, doesn’t need Mom’s rent money anymore. He’s enjoyed a steady stream of movie roles starting with Paper Soldiers (2002), Scary Movie 3 the next year, Soul Plane (2004), In the Mix (2005) and Little Fockers (2010). He ranked as the highest paid comedian by Forbes, valued at $87.5 million.

In his latest gig, a quixotic Hart fails hilariously in his constant attempts to climb Hollywood’s social ladder.

And while he’s not overly vocal about his Christianity, Hart is believed to hold the values of his mother, even if he pokes fun at her zeal in comedy routines.

“His whole family was dedicated to Christianity, and Hart uses his family’s faith as a frequent topic in his stand-up. He doesn’t make fun of Christianity itself, but he does make fun of how people can be hypocritical with religion (like his drug addict Jesus-loving cousin),” according to Hollowverse.

Hart was born in Philadelphia in 1979 to a cocaine-addicted father who was in jail more than he was in Hart’s life.

As a teen growing up in a harsh reality, Hart resorted to humor as a coping mechanism. His love for slapstick eventually won several amateur comedy competitions on the East Coast until landed recurring role on the TV series Undeclared.

He invited Christian rapper Lecrae to open for him at the Essence Festival 2015. He invited Christian YouTuber Coryxkenshin to his son’s birthday. Hart enjoys playing nerf-gun wars and ‘onesie’ parties with his kids, Heaven and Hendrix. He’s also a major basketball fan.

Sadly, Hart and his wife Torrei divorced in 2011 citing irreconcilable differences.  In 2016 he remarried Eniko Parrish in the Santa Barbara area.

As an adult, he finally forgave his father for his irresponsible parenting. “My dad said, ‘I was supposed to be on drugs,’ ” Mr. Hart told the New York Times. “I was like, ‘Dad, shut up,’ but then I thought about it, and it was stupid but it made sense. He was saying that, basically, he was my example to never go down that road.”

In 2013, Hart was arrested for drunk-driving after the CHP caught him driving erratically on Highway 101 at 90 mph at 4:00 a.m., almost colliding with a tanker truck. Not even this public humiliation could escape the comedic cross hairs.  “When the cop asked me to take the sobriety test I said ‘Why waste our time? I’m drunk man,’” he joked.

After being released from jail, he apologized on Twitter: “This is a wake-up call for me, I have to be smarter & last night I wasn’t. Everything happens for a reason.”

In 2012, Hart wasn’t worried about being eclipsed when Barack Obama addressed the Democratic National Convention at the same time Hart was set to host the Video Music Awards. 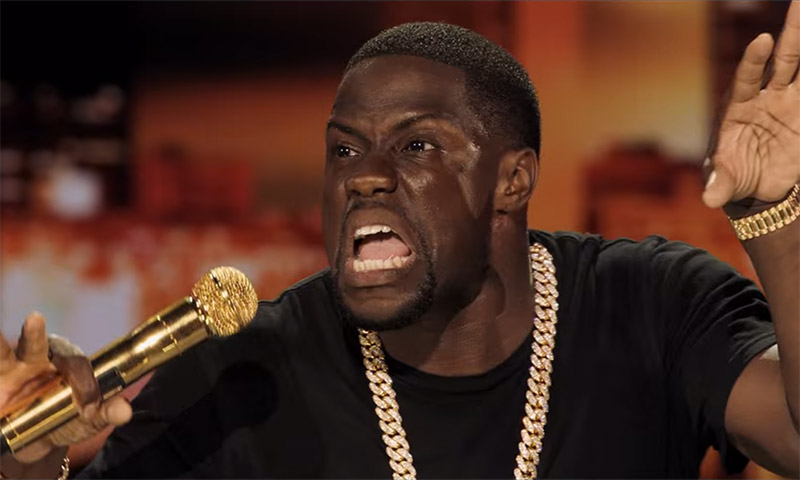 “I don’t think they can compete. ‘Cause it’s me! You know at the end of the day, the world wants to see me,” Hart joked (we think). “You know, I’ve got six million followers on Twitter … [the] Facebook fan page is almost at seven million. Click of a button baby… It’s easy. All I have to do is tweet that I’m about to go on stage and everybody’s going [to] watch it in the world.”

Ultimately, MTV bowed to Obama and changed their show to a different time. Hart took the stage that night with an entourage of mock secret service personnel.

For a comedian, virtually nothing is sacred. When Robin Williams accepted Jesus late in life while struggling with addictions, he couldn’t resist the urge to quip: “I’m an Episcopal; that’s Catholic Lite – same rituals, half the guilt.”

For the professional funny man, the public persona portrays incessant slapstick. But in private, comedians like Hart are faced with the same unfunny darkness gripping all human beings, the ugly reality of sin and the need of a Savior.

Devout Christian Steve Harvey is a friend who describes Hart as thoughtful and emotional. The New York Times reported that the two conversed about “his need to adhere to the values that his family had taught him.”

“The guy started crying, you know?” Harvey said. “But then he said, ‘Hey, man, I don’t want you to think I’m some little punk, so don’t even worry about this, ’cause this ain’t really a tear.’ And then he wiped it off, right quick. I know a tear when I see one.”

Hart will always remember his mom Nancy with fondness. She passed into eternity in 2007, succumbing to cancer.

Death has a way of getting people’s attention in a serious way.