A Sierra Leone pastor who supplements his income by working in the mines found one of the largest diamonds ever pulled from the earth, then gave it away.

Pastor Emmanuel Momoh found the gargantuan 706-carat stone in the Kono region. Experts said the stone could be worth as much as $62 million, depending on the quality. It was the largest diamond discovery since 1972, according to Africa Today. 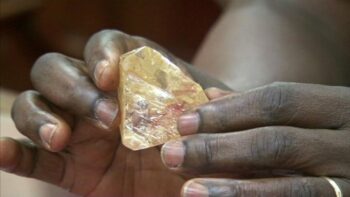 Industry analysts said it is the 13th largest uncut diamond ever extracted.

Pastor Momoh presented the diamond to the president of Sierra Leone, Ernest Bai Koroma, with instructions that the gem be used for the betterment of the poor in Sierra Leone.

“I believe the government can do more,” Momoh told Africa Today, “especially at a time when the country is undergoing some economic challenges.” The pastor said he would like to see improved access to electricity and transportation for the poor.

After Pastor Momoh gave the remarkable gift to the government, it was locked in a vault at the Bank of Sierra Leone in the Freetown capital, according to Africa Today.

People in the village of Yakadu, where the pastor found the diamond, live in an area that has been devastated by a bloody civil war and the Ebola crisis.

There are many large companies operating in the Kono diamond fields, using colossal Caterpillar bulldozers, dredges and industrial water pumps. So it is all the more surprising that Pastor Momoh found the gem using simple tools for panning and digging.

Some will take it as an answer to prayer, or at least a reflection of God’s sense of irony and heart for the poor.

“With the virtuous vicar then handing the stone to the authorities, it may also strike many

as an act of propitiation, a moment when Sierra Leone symbolically distanced itself from the diamond-driven bloodlust of its 11-year civil war, which ended in 2002,” noted Adrian Blomfield in The Telegraph.

Blomfield observed that thousands of “enslaved” Sierra Leoneans spent the better part of the early 2000s digging with hand shovels in the mud, forced to dig for diamonds to finance a rebellion mounted by a Liberian-backed warlord, Foday Sankoh.

“Sankoh’s Revolutionary United Front punished those who resisted it by cutting off limbs, ears and genitals or gouging out eyeballs. More than 100,000 people were killed and tens of thousands more were maimed before military intervention by Britain in 2000 turned the tide of the war in the government’s favor.”

President Ernest Bai Koroma gave assurances the auction of the diamond would be conducted in an upright manner and praised Pastor Momoh “for not smuggling the diamond out of the country.” He also stated that Pastor Momoh would be rewarded.