With doctors on strike for weeks in the government-controlled healthcare system, mission doctors are playing a crucial role amid horrific conditions that continue to deteriorate.

Since December 4th, more than 5,000 medical staff connected to 2,000 public hospitals have been on strike, protesting the government’s failure to honor a 2013 agreement for a pay increase.

Some missionary doctors, like Scott and Jennifer Myhre, are filling in the gap at public hospitals amid power outages, and other life-threatening supply shortages.

The Myhres are missionary physicians from the U.S. who joined Serge (then World Harvest Mission) in 1991, and have worked in East Africa since 1993: 17 years in Uganda; five years in Kijabe, Kenya; and now partnering with the Kenyan government hospital in Naivasha. The couple met when they were students at the University of Virginia.

On January 21st, about 1 pm, Scott and Jennifer were about to go shopping for groceries when they received an emergency call about a woman with an ectopic pregnancy (the fetus is not in the womb, but in one of the Fallopian tubes which ruptured).

After they arrived, Scott discovered the woman’s blood pressure was 70/30, too unstable to transfer her to any other hospital.

“It’s him, or nothing,” Jennifer noted on their blog. “He’s done this surgery before, but not often enough to be confident.”

But there were other problems on Saturday, like no power, because workmen were installing a back-up generator but had not yet finished. They were also out of sutures, the lab was unable to run samples, and there was no blood in the blood bank.

Scott began to operate on the woman wearing a headlamp in the dim light. “Blood is pouring out onto the floor, the suction isn’t working. A back-up power source was running the electrocautery, but then stops (it turns out the anesthetist tripped over the plug, but we don’t realize that at the time).

Jennifer stood quietly nearby, watching and praying as he worked.

“He eventually stops the bleeding, cleans out the clots, removes the ruptured tube, sews her up. She lost about half her blood volume. Instead of a post-op ICU, she gets a general ward with no monitoring. But by God’s grace, she lives.”

“This is what a doctor’s strike looks like,” Jennifer noted on their blog.

The Wyhres had returned to the U.S. for a few weeks during Christmas. When they left, they never imagined that 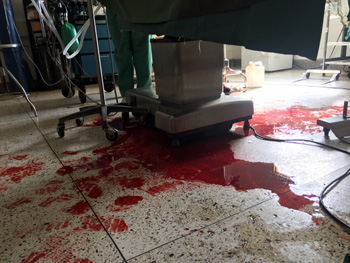 after a month they would return to an unresolved humanitarian crisis.

“We missed weeks 3-6 of the strike,” she says, “as mission hospitals kept shouldering larger and larger burdens as the only option for many. Private clinics continued to rake in their unaffordable-to most fees, and the poor stayed home getting sicker or dying or recovering on their own. Doctors and the government each retreated into their own camps, willfully refusing to see the deathly consequences of their inaction.”

In early January, four women died having babies in a “shady” private clinic nearby. “We’ve been working pretty hard, long days,” Jennifer says. “It feels like Ebola, the shutdown of services, the wild few who decide to do something about it, the stretch, the constantly shifting horizon.

This week there are 30 babies in the Newborn Unit and 23 in another ward. Jennifer is overseeing all these newborns with two (non-union) interns who have no pediatric experience.

“Scott says it has been alternately exhilarating and terrifying. He’s tried to refer really sick or complicated patients that are beyond his usual experience, but the only place to go is the mission hospitals and while those are reasonably priced for the middle class, we can not convince many Naivasha poverty-level patients to go.

She notes that mission hospital beds are often full and will stop admitting, so finding space is difficult.

The couple has found strength from above in the heat of the crisis. “God is present in the midst of the struggle,” Jennifer says. “The NBU mothers sing praise songs and pray over their babies at the start of each day, in this non-mission hospital. Scott prays over his surgeries. We are in over our heads, but patients are still getting better (at least most of them are) because God is here.”

“A few times this week, I’ve wanted to feel really sorry for myself. I have a nasty cold. We’re both jet-lagged. Things don’t work. But then I admit two surviving of three triplets born on a (dirt) path on the way to the hospital, to a mom with AIDS. Or a premature baby born to a 15-year-old 8th grader who got no prenatal care. Or walk out to see a mom delivering on the floor. Then I stop grumbling and remember the privilege of walking alongside these courageous, polite, and generally cheerful women.”

Jennifer admits she and Scott can’t keep up their frenetic pace indefinitely. “Please do pray for resolution. Pray for stamina, for wisdom, for miracles of healing, for kindness towards those we work with and each other.”

For more about the Myhres mission in Kenya, go here