A battle is currently being fought over a relatively obscure town in Syria near the Turkish border that ISIS and many Muslims believe will usher in the apocalypse and return of their messiah.

“If matters proceed as planned, within 48 hours we will be in Dabiq,” Ahmed Osman, commander of the Sultan Murad Free Syrian Army (FSA) group, told Reuters on October 3rd. At least 15 Turkish and US-backed Syrian rebels were killed in the initial fighting.

However, the advance on Dabiq slowed due to extensive mines, mortars, and explosive devices in their path. Also, ISIS reinforcements have poured into the region, knowing its “end times” significance.

ISIS believes their 12th Mahdi will arrive after the final apocalyptic battle between “Rome” (or Western forces including the U.S.) and Islam is fought in Dabiq, Syria. While the town has little strategic military significance, the Koran prophesies that this battle, whether won or lost, will initiate their apocalyptic “end times” events. 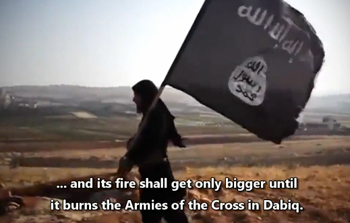 “They have been trying to goad the West, primarily the US, into inserting ground forces at that locale.”

Dr. Furnish cited an Islamic teaching of Mohammed which states that the “Last Hour would not come” until a vastly superior Roman army composed of “the best soldiers of the people of the earth at that time” came to battle Islam in Dabiq.

Islam’s vision of Messiah is the resurrection of a Muslim Jesus, who will convert all Christians to Islam. Those who do not convert will be killed, Dr. Furnish told BIN.

Dabiq is a town of only 3,000 people, about 10 miles from the border with Turkey. Rebel troops, including 300 US Special Forces, are involved in the current fight to take the town back from ISIS. 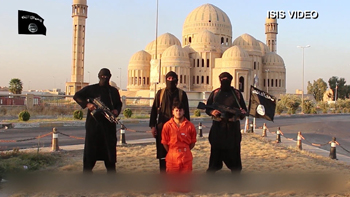 To highlight the town’s importance, ISIS even named its online propaganda magazine after the town of Muslim Armageddon.

“The spark has been lit here in Iraq, and its heat will continue to intensify – by Allah’s permission – until it burns the crusader armies in Dabiq,” The magazine’s front cover proclaimed, quoting Abu Musab al-Zarqawi.

The small town was featured in a video with “Jihadi John“, the British Muslim who joined ISIS and murdered five Western hostages in 2014. He mocked Americans by displaying the severed head of American aid worker Abdul-Rahman Kassig, a former US Army Ranger, at his feet.

“Here we are, burying the first American Crusader in Dabiq, eagerly waiting for the remainder of your armies to arrive,” he said in the video.

The 300 US Special Forces fighting for Dabiq may represent some of “the best soldiers of the people of the earth,” a partial fulfillment of the prophecy.

Bucking conventional wisdom, Dr. Mordechai Kedar, an Israeli scholar, believes an ISIS defeat in Dabiq will be even more disastrous for the West than an ISIS victory.

“They will claim that the war on Dabiq can be carried out in the streets of Paris, London, Berlin, Washington DC and Jerusalem,” Dr. Kedar told BIN. “Meanwhile we can see a war between Russia and the US on Syria. Put simply, Gog and Magog.”