Planned Parenthood followed the eugenics philosophy of its founder, Margaret Sanger – disproportionately placing abortion clinics in African-American neighborhoods – and has achieved her grisly vision by exterminating almost half the black population in the United States.

“It’s clear black America has lost 20 million lives,” says Walter B. Hoye II, president of the Issues4Life Foundation, citing abortion statistics provided by the Guttmacher Institute going back to 1967. “We have 40 million (African-Americans), (and) lost almost half of our entire population to abortion.”

“The current cumulative number of abortions from 1967 through June of this year is 59.4 million, of which an estimated 20,350,000 are Black American abortions.”

The reduced numbers undoubtedly diminish African American’s political clout. “If not for abortion, the total Black American population would be approximately 62,350,000, or 48% greater than it is today,” Hoye notes.

While Planned Parenthood disavows the eugenic philosophy of their founder, they knowingly or unknowingly achieved her aims.

One of Sanger’s strategies was to co-opt black leaders – particularly ministers — and use them to spread her population policies. Sanger wrote: “We should hire three or four colored ministers, preferably with social-service backgrounds, and with engaging personalities. The most successful educational approach to the Negro is through a religious appeal.

“We don’t want the word to go out that we want to exterminate the Negro population,” Sanger wrote, “and the minister is the man who can straighten out that idea if it ever occurs to any of their more rebellious members.” 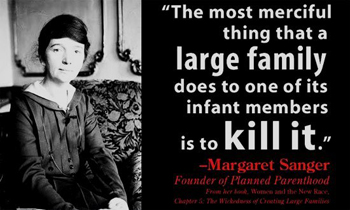 Advancements in mapping using GPS confirm the targeting of black neighborhoods with abortion clinics. “With Google map technology there is no longer any question they are targeting minority neighborhoods,” Hoye observes.

“Keeping the Black American community smaller and less powerful reflects the racist, eugenic and genocidal mindset behind the abortion policies advanced by Planned Parenthood…If ‘Black Lives Matter,’ then the life of the human being inside the womb of his or her Black mother matters too.”