“We wanted to tell the story of the First Emperor of China with some spiritual aspects to this historical reality that we thought merited adding a fantasy element,” said Godawa, the author of the Biblical fantasy series Chronicles of the Nephilim. “Much like the Chinese action movies, an element that adds a heightened reality.”

He adds, “I’m using the fantasy genre as a means to show spiritual reality. This allows me to have some fantastical things without violating the actual true history of it. We’re re-interpreting this ancient story through a Biblical paradigm. And that paradigm is that at the Tower of Babel, when God separated the nations, He placed the nations under the authority of spiritual-watcher beings. So, in other words, behind the earthly authorities there are spiritual authorities in the heavenlies.”

In The Dragon King, It’s 220 B.C. The ancient Western Empire is crumbling. In a desperate bid to save his throne, the Greek Seleucid king over Babylon sends his son, Antiochus, a dishonored warrior, into the mysterious land of the Far East to capture a mythical creature that will give him absolute power: a dragon. 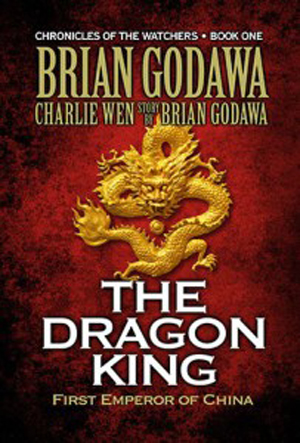 Antiochus takes with him his longtime friend, Balthazar, a member of the Magi order of Babylon, responsible for both the religion and science of the empire. But Balthazar also carries with him a dangerous secret that could destroy Antiochus’ plans and plunge the world into chaos.

They sail beyond their maps into the mysterious and uncharted Eastern Orient. They are discovered and escorted inland to the empire of Ch’in (now known as China), ruled by the first emperor, Ch’in Shi Huang Di. The emperor is a brutal ruler on the edge of insanity in a mad quest to find the elixir of immortality.

Antiochus meets and falls in forbidden love with Mei Li, a beautiful concubine of the emperor. But she also harbors a secret that can bring down the mad emperor. It’s the truth of China’s spiritual past that is mysteriously connected to the ancient Tower of Babel.

And there are spiritual principalities and powers who seek to stop them all. These are the Watchers, who have their own plans to rule the world. Finding and capturing a dragon is the least of Antiochus’ difficulties in this action-adventure clash of cultures and war of gods.

Part of the Historical Fantasy Series Chronicles of the Watchers

The Dragon King is the first book of the Historical Fantasy Series, Chronicles of the Watchers that charts the influence of spiritual principalities and powers over the course of human history. The kingdoms of man in service to the gods of the nations at war. Completely based on ancient historical and mythological research.

Godawa’s previous series Chronicles of the Nephilim has continued to dominate the Top 20 of Biblical Fiction on Amazon for the past five years. Wen visually developed The Avengers, Ant Man, Captain America, Iron Man, Thor and Guardians of the Galaxy.

The two say that Dragon King is based on historical and mythological research into ancient China and its hidden connection to Babylon and the Bible. Also, the book explores the differences and similarities between the cultures of East and West, with an appreciation for both worldviews.