At the climax of a lengthy, Spirit-filled day of prayer and worship in the L.A. Coliseum on Saturday, fifth generation preacher Daniel Kolenda delivered an evangelistic message aimed at a “perverse generation.”

Organizer Lou Engle hoped to fill the venerable sports venue to capacity and had 115,000 registrations prior to the event, but spotty rain dampened the attendance to about 70,000. The youthful throng who attended were energized by a passion for revival.

Kolenda, who lives in Florida with his wife and three children, succeeded Reinhard Bonnke as head of Christ for All Nations, and has participated in massive evangelistic campaigns throughout the world, mostly in Africa. 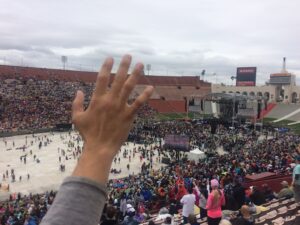 He began his talk by noting the timing of the event coincided with the 110th anniversary of the Azusa Street revival in Los Angeles.

“The outpouring of the Spirit we are celebrating tonight did not begin at Azusa Street. It began in the Upper Room,” he said, as he proceeded to follow the Apostle Peter’s first sermon message recorded in Acts 2.

Kolenda said Christians are living today in the fulfillment of Joel’s prophecy, which Peter referenced in his first sermon. “We are living in the greatest days of harvest in the history of the world,” the young evangelist declared. “The Spirit of God is sweeping across entire nations. The church of Jesus Christ is rising and the Kingdom of God is advancing.”

“The outpouring of the Holy Spirit has been given not just to have good church services or fill stadiums, but so that we can go and change the world,” he said, noting that the early church was characterized by a boldness in their witness.

“I believe the harvest is coming in now,” he continued. “We have fasted. We have prayed. And now we will see

the fulfillment in the mighty name of Jesus. I believe America has never imagined what is about to come in Jesus name.”

Scanning thousands of expectant faces in the Coliseum, he said, “If 120 in the Upper Room could shake the world, what could this group do?”

He quoted Acts 2:40 when Peter says: “Be saved from this perverse generation.”

“When we hear the word “perverted” we think of sexual perversion. If there has ever been a sexually perverted generation, we are living in it now. Jesus can take that away from you, wash you and cleanse you, and set you free,” he declared.

Kolenda noted that perversion is not always limited to sexual things. “To be perverted means to be distorted, twisted, used for something it was not intended for. Satan is trying to twist an entire generation, to take away their identity, men and women made in the image of God.” 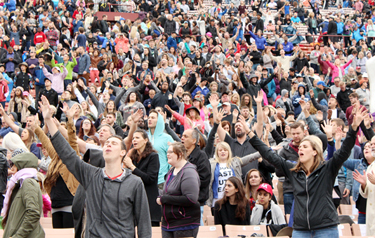 “People are in chains and they don’t realize it. A man came up to me after I preached and he told me he was addicted to pornography and it was destroying his life and his marriage. He was trapped, but he said he kept going back to it because it was an escape.”

The irony is the man wanted to escape from something he saw as an escape. “If you need to be delivered from an escape it is not an escape at all. It is a prison, a living tomb. Jesus Christ has come to set you free.”

“The Scripture says the natural man is bound in chains to his sins, a slave to his natural desires, addictions and compulsions. Spurgeon said there is no greater mockery than to call a sinner a free man.”

For some sins, such as homosexuality (which Kolenda did not mention by name), the dominant message from the culture says the individual cannot change.

“The world says you can’t change, you’re stuck with your compulsions and addictions. I’m here to tell you Jesus still sets sinners free. The Gospel of Jesus Christ is not about making your prison more comfortable. He didn’t come to renovate your prison cell and give the wall a new coat of paint. Jesus came to break down the doors and smash your chains. This is not a gospel of renovation or decoration. It’s a gospel of liberation. He who the Son sets free is free indeed.

“But you can’t save a perverse generation if you’re part of it. One dead man can’t help another dead man. One slave can’t liberate another slave. One prisoner can’t set another prisoner free.

“God has a calling on your life, a purpose for your life. Before you connect to God’s purpose, first, you must be saved from this perverse generation.

Kolenda invited everyone in the Coliseum to stand, with every eye closed and every head bowed, then he asked: “How many of you would say you need to be saved? The Bible says that everyone who calls on the name of the Lord will be saved. If you want to be set free, to be delivered, to be saved, lift your hand.”

Immediately ushers fanned out to people who raised their hands and gave them a book. Then Kolenda led those with their hands raised in the sinner’s prayer.

Then Kolenda issued a second invitation for those standing to receive the baptism of the Holy Spirit.

“This is not a tarrying meeting. This is a receiving meeting. You shall receive in the mighty name of Jesus. We are not just talking about what the Holy Spirit did 110 years ago. He is alive and well and He is going to fall and fill your hearts today. When the Holy Spirit falls, people just don’t speak in tongues, every kind of miracle can happen, every kind of gift can be received in Jesus’ name.

“God will give the Holy Spirit to whoever asks. You’re not a beggar; you’re a son or daughter of the living God. Say, ‘Lord, I’ve come now to receive what you have promised. I claim it boldly in Jesus name.

“If you’re ready to receive, close your eyes, lift your hands, and shout ‘Hallelujah!’

“Receive in Jesus name the fire of the Holy Ghost. Open your mouth. Rivers of living water are bubbling up right now,” he declared.

While there may have been some manifestations of the outpouring in the Coliseum, it appeared – like the rain showers throughout the day – to be mostly spotty. The hoped-for revival did not seem to arrive in a dramatic fashion on the 110th anniversary of Azusa Street, but many left with renewed joy and continued expectancy, waiting on the Lord’s sovereign timing for a great revival.

If you would like to know God personally, go here