The homes, belongings and finances of Iraqi Christians are being seized by Muslim militia backed by Iran, Christian members of the Iraqi Parliament said.

The military units, directed by Iranian advisers, are supposedly combating ISIS in a loose coalition with the U.S.

“Their claim is that the property of a non-Christian is halal, meaning it can be seized,” said Chaldean Patriarch Louis Raphael Sacco to the Arab daily Al Hayat.

When they lose their properties, the Iraqi Christians are forced to flee and resettle elsewhere. There are Assyrian, Chaldean and Syrian minorities being affected by the seizures in Baghdad and Erbil, the Foreign Desk reported. Militia have forced entry into homes and businesses in upscale parts of Baghdad using falsified documents.

“We are begging, once again, appealing to the conscience of government officials and authorities from Sunni and Shiite states in order to do something meaningful to safeguard the life and dignity and property of all Iraqis, because they are human,” Sacco said.

Dr. Walid Phares, an adviser to the U.S. Congress, told The Foreign Desk that the U.S. administration has partnered with the Iranian regime and indirectly helped these militia to attack Christians.

Until the ISIS forced them to abandon their homes, Iraq’s minority Christians boasted being one of the oldest Christian communities in the world with communities in Baghdad, Basra, Erbil and Kirkuk. The Assyrians lived in towns and regions around the Nineveh Plains in the north until ISIS displaced them. 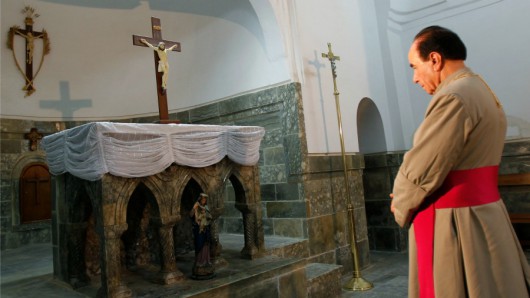 In 2014, the Islamic State announced that all Christians under its territories must pay a minority tax, or jizzyah, of approximately $500 per family, convert to Islam or be put to death. Later, the decree was rescinded, and Christians had to leave the caliphate or die without an option to pay the tax and remain in their homes.

At that time, Christian homes and properties were painted with the Arabic letter N, or nun, for nassarah, which means “Christian” in Arabic.

According to Sacco, there are no Christians left in Mosul for the first time in Iraq’s history.

“In the long run, the U.S. should help establish an autonomous area for the Assyrians, Chaldeans and Syrians in their homeland Nineveh Plains, near Mosul and help the Yazidis establish their own area in Sinjar,” Phares said.

Phares also urged Washington to demand more from its anti-ISIS partner, Iraq, who receives aid, funding and training to evacuate militias, to now protect the empty homes and return Christians to Baghdad.