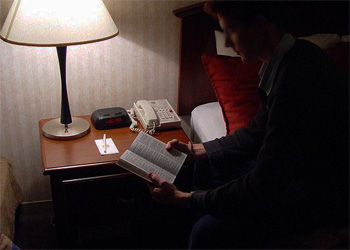 A few years ago in Spain a man named Antonio* cried out to God, “If you’re real, speak to me!” He was in an elevator on his way to a hotel room. Highly educated at 27 years old, he had taught chemistry and math at a Catholic school in Spain. He knew of God, but didn’t know Him personally.

The bellhop helped him to his room where he found a Gideon Bible on his bed. When he asked why the Bible was on the bed, the bellhop told him it was for those who wanted “to hear God speak to them.”

The same day Antonio accepted Jesus as his Lord and Savior, he preached the gospel to his entire family. In one week, 35 of his family members became believers. Along with Antonio, his family began to share the Good News with others. Within the span of a few weeks, 200 people were born again.

That’s not all. Antonio began preaching in the prisons of two districts in Spain, and the first year, 1,000 inmates gave their lives to Christ. He gradually expanded his outreach to all of the prisons in Spain, and today there are more than 100 “home group” churches inside of those prisons.

Revival had begun in a spiritually dead country, where many were disillusioned with the Catholic Church and had become atheists.

As a direct result of the 70+ house churches Antonio has planted in Spain, he is seeing between 10 and 15 people come to the Lord every week.

According to Antonio, in the last 10 years, the percentage of evangelical Christians in southern Spain has risen from 1% to 8%.

The revival is spilling over the border into Morocco, separated from Spain by the Strait of Gibraltar. On the north coast of Africa, sharing a western border with Morocco, is the Spanish city of Ceuta.

Every day, approximately 20,000 Moroccan women enter Ceuta to buy and sell goods in the marketplaces. The vast majority of these women are Muslim. Antonio’s ministry to the Moroccans began after he and his coworkers led several of these women to the Lord in Ceuta, and encouraged them to go back and share with other women in Morocco.

Coming from southern Spain, Antonio’s culture is very similar to that of the Moroccans, who have been quick to accept him as one of their own. Friendly talks lead to discussions about God—namely the evidence of Him in creation—which eventually lead to the sharing of the gospel of Jesus Christ.

Through Antonio’s work, more than 100 house churches exist in Morocco. . . and he shows no signs of slowing down.

Because a man who is native to the land shared the gospel with his family, and these natives went out and shared with their friends and neighbors, thousands of people have come to Jesus. This amazing movement is entirely organic.

The Great Commission wasn’t just given to the United States of America, it was given to the Church—worldwide. And we are committed to helping our brothers and sisters overseas with the financial assistance they need to carry it out in their respective countries. — Christian Aid Mission