By Petrina Gratton and Mark Ellis

The Grand Ayatollah of Iraq said that if non-Muslims don’t convert, “we fight them, abduct their women, and we destroy their churches” in a recent televised interview.

“If a person is a Christian, he has three choices. Either convert to Islam, or if he refuses and wishes to remain Christian, then pay the jizya” tax to Muslims, said Ahmad al-Baghdadi, the leading Shia cleric of Iraq. “But if they still refuse, then we fight them, and we abduct their women, and we destroy their churches. This is Islam!”

As the maximum religious leader in his country, the ayatollah holds great sway over Muslims both inside and outside of Iraq. His comments appeared to urge Muslims to carry out a war to impose Islam on the whole world, a declaration that even the T.V. host found alarming.

“This cannot be Islam,” the host said, interrupting his guest, apparently coaxing a more tolerant posture.

Al-Baghdadi bristled at the objections of his host, who dressed in a Western suit and sported a Western haircut. 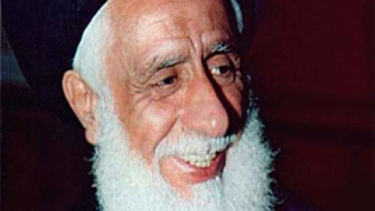 “Who are you? You’re going to tell me what to believe? I am the scholar of Islam. This is the word of Allah!” Al-Baghdadi snarled. “You are just a journalist. You, listen to me! Learn what Islam is! Are you even Muslim?”

The interview, which was posted on YouTube on Sept. 14, was translated by Raymond Ibrahim, a jihad watchdog, in an article on conservative Front Page magazine in mid October.

Al-Baghdadi’s comments echoed a Saudi legal expert, Basem Alem, who in 2009 said, “As a member of the true religion [Islam], I have a greater right to invade [others] in order to impose a certain way of life [according to Sharia], This is the true meaning of offensive jihad.”

Al-Baghdadi spoke about the difference between “defensive jihad” – liberating territories like Israel that once belonged to Islam – and “offensive jihad” – conquering new terrains, as the Prophet Mohammed unleashed in the 7th Century that extended to Spain, Turkey, Northern Africa and the Middle East.

In his calls to all Muslims everywhere to honor their obligation to jihad, no exclusion was made for Muslims living in the Western world as refugees. The U.S. plans to accept 85,000 Syrian refugees for fiscal year 2016 and another 100,000 the next year, according to the New York Times.

Logically, these refugees are not exempt from the Al-Baghdadi’s call for jihad.

Petrina Gratton is a student at Lighthouse Christian Academy in Santa Monica, California