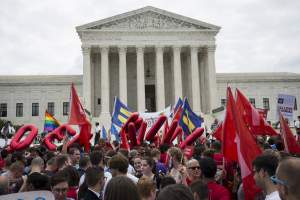 A deeply divided U.S. Supreme Court transformed the definition of marriage in a 5-4 decision that brings sweeping social change to a venerable institution that precedes the fall of man.

In Associate Justice Anthony Kennedy’s majority opinion he wrote, “The right to marry is a fundamental right inherent in the liberty of the person, and under the Due Process and Equal Protection Clauses of the Fourteenth Amendment couples of the same-sex may not be deprived of that right and that liberty.”

Such a stance upholding the traditional view may ultimately subject churches and other faith-based groups to costly court battles, loss of tax exemption, fines, and the imprisonment of church leaders.

In the majority opinion, Kennedy said “religions, and those who adhere to religious doctrines, may continue to advocate with utmost, sincere conviction that, by divine precepts, same-sex marriage should not be condoned. The First Amendment ensures that religious organizations and persons are given proper protection as they seek to teach the principles that are so fulfilling and so central to their lives and faiths, and to their own deep aspirations to continue the family structure they have long revered.”

On the surface, this seems to soften the blow to churches. But Chief Justice John Roberts found the majority’s assurance troubling – even “ominous,” saying the decision “creates serious questions about religious liberty” because of an important word left out.

“The majority graciously suggests that religious believers may continue to ‘advocate’ and ‘teach’ their views of marriage,” Roberts wrote. “The First Amendment guarantees, however, the freedom to ‘exercise’ religion. Ominously, that is not a word the majority uses.”

“Indeed, the Solicitor General [Donald Verrilli in oral arguments] candidly acknowledged that the tax exemptions of some religious institutions would be in question if they opposed same-sex marriage. There is little doubt that these and similar questions will soon be before this Court. Unfortunately, people of faith can take no comfort in the treatment they receive from the majority today.”

In the same paragraph in which Kennedy acknowledges churches rights to “teach” and “advocate,” it says “The Constitution, however, does not permit the State to bar same-sex couples from marriage on the same terms as accorded to couples of the opposite sex.”

“In our society, marriage is not simply a governmental institution; it is a religious institution as well,” Thomas wrote. “Today’s decision might change the former, but it cannot change the latter. It appears all but inevitable that the two will come into conflict, particularly as individuals and churches are confronted with demands to participate in and endorse civil marriages between same-sex couples. The majority appears unmoved by that inevitability. It makes only a weak gesture toward religious liberty in a single paragraph. And even that gesture indicates a misunderstanding of religious liberty in our Nation’s tradition.”

Doug Wardlow, legal counsel for the Alliance Defending Freedom, is also troubled by the ruling. “As Alito points out in his dissent, by making comparisons to blacks the court has done a disservice to people of faith.”

“The two issues have nothing to do with each other; the comparison is a false one. I maintain and hope that the First Amendment free exercise clause should trump a newly invented constitutional right.”

“I would not be surprised if people sue churches. This ruling puts us on the path of obliterating religious freedom.”