In the village of Armi, about six-hours from Kathmandu over rugged terrain, every single home was leveled by the enormous quake April 25th. A four-person team of young people from Orange County, California made it to Armi and recount the fortitude of the people to rebuild.

“When the earthquake struck, 36 people were killed and every single home was leveled,” says Sam Ellis, a youth minister at Church by the Sea in Laguna Beach. He was accompanied on the relief mission by Ryah Arthur, from the same church and Tali Constantz and John Fredricks from Saddleback Church.

Sam and his teammates were the only responders to this town. All the roofs of their houses fell in. “They are very stressed because they have so much more work, to rebuild and tend their fields.”

One day an older man in the village approached Sam and said, “I do not understand the power that compels you all to come help us. My brother in the next village will not help, but you come from the other side of the world?

“This power I must understand,” he said.

Several Hindu families in the village prayed to receive Christ as Sam and his team met with them, offered basic first aid, prayer, and explained the Good News about Jesus.

“Many people came up to me asking for prayer. They are open to Jesus,” he says.

“Tents are like gold here. It’s really hot, in the 90s by noon. It rains almost every afternoon now, but people are worried about the heavier monsoon rains coming, which may bring landslides.”

“Everybody is building houses. They have wood beams for the main structural support, then bamboo is used for

the walls, and tin roofs. They are salvaging a lot of the materials. We paid for the tin, $140 per roof. Altogether, the materials for each house cost $200. Everything has to be brought from Kathmandu,” Sam reports.

Sam and his teammates built six simple one-room houses during their six days in Armi. “I never worked so hard in my life. I have blisters all over my hands. We built them for the neediest people in the village. Our first house was for a widow with three children; her husband died eight years ago.”

“There is a need for continued manpower, not just aid,” Sam continued. “They really need people on the ground going to serve build homes. Many villages are still just completely flattened and they are just building the same way they have for years because they don’t have the experience, money or manpower.

“One man was just sitting there hopeless. It wasn’t until we started moving rubble and helping that he was moved to jump in. These teams coming to help are subsequently leading to huge inroads for missionaries that are on the ground to proclaim the gospel.” 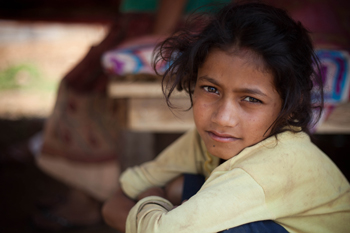