When ISIS overruns a village in Syria or Iraq, or even a city of two million people such as Mosul, many will flee, creating a huge flow of refugees to surrounding areas.

But a few Christian pastors have made the courageous decision to stay behind and minister to Christians and Muslims. “They all know they’re at risk, especially if they’re a visible leader,” says Stephen Van Valkenburg, Middle East director for Christian Aid Mission.

He recently received a heartbreaking report from Aleppo, Syria that underscores the danger. Pastor Imad, who chose to remain for the purpose of sharing Christ, was shot in the head by extremists two weeks ago. His wife has disappeared, likely kidnapped. They both came to Christ from Muslim backgrounds.

“That man could have left the country if he’d wanted to,” Van Valkenburg notes. “Like other Syrian pastors and Christian workers, he had connections and could have found a safe way out.” 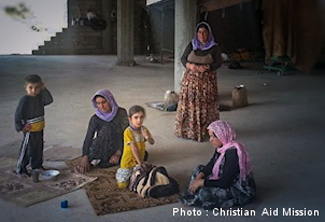 Van Valkenburg doesn’t begrudge those who leave, often to protect their families, but he has great esteem for those who make the conscious decision to remain behind.

“They stay because they have an opportunity to share Christ like never before. For years they’ve prayed for a spiritual breakthrough and now they are seeing it. Their friends and neighbors have never been so open to the gospel.”

Van Valkenburg has received remarkable reports from Mosul, which was captured by ISIS on June 10th. Over 150,000 people fled the city in advance of the marauders. “I thought all the (Christian ministries) left, but there are still workers there,” he notes. “They say this is the greatest time ever, because there is such a great harvest there now.”

Aleppo, the largest city in Syria, has been under siege since July of 2012 and over 13,000 have died. “There are quite a few Christians left in the city,” Van Valkenburg says. They report it is difficult to live under the war-torn conditions, with water and electricity in short supply and sky-high prices for basic commodities. “People have been shot over a single piece of fruit.”

“When they try to bring in food, the convoys are bombed,” he says. “Nobody is safe in Syria. They stay for the love of Christ.”

Many of these Christian leaders have the attitude that the captain should be the last one to leave a sinking ship. They also point to the teaching of Jesus about the Good Shepherd, who stays with his flock when the wolf attacks, while the hired hand runs away.

The rewards have been enormous, despite the costs . “This is what they’ve prayed for for years,” he notes. “They are seeing fruit; they are seeing people coming to Christ. Now they see this openness like never before.”

“I think of a pastor who knows that he and his family could be killed at any moment. He fears what will happen to his wife and three daughters if they are captured. But there are 100,000 internally displaced people living near him who need the gospel. His ministry is expanding. He is seeing fruit far greater than he could have ever imagined four years ago.”

Muslims are receiving prayers in Jesus’ name from these pastors. “Every ministry I talk to says their workers are praying for people in the name of Jesus Christ and none of them objects. They know they are Christians,” Van Valkenburg says.

“I think of Christian workers in Syria who are reaching thousands, even though they must travel through dangerous areas. They are sharing the gospel with Muslims in Islamic areas. An ISIS caliphate isn’t keeping the gospel out.”

Some of the gospel workers ministering to Syrian refugees are working 18 hours a day, seven days a week. “They endure this, despite personal pressures, because they want to honor Christ and reap this great harvest. They’ve been praying for Muslims, and suddenly there are Muslims receptive to the gospel all around them.”

“This work is not for the faint-hearted,” he notes. “Through suffering and perseverance, these Christians are maturing in faith, having to trust God far more than ever before. They were serving in Islamic areas before the Arab Spring, but never under this much pressure and in this much danger.”

“They are being tested in ways we never get tested in the United States.”

“Let’s pray for our suffering brothers and sisters, for God to bring terrorists to Himself, for the eyes of millions to be opened to the Lord Jesus Christ…for receptive hearts. Only the message of the gospel can change hearts.

“And let’s intercede for these courageous workers—the last ones to leave. Christians serve the most important function in the Middle East because only our message can produce true peace.”