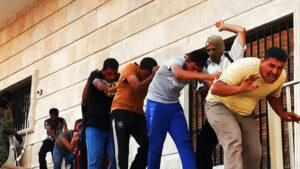 The Tunisia Daily is reporting that the Islamic State (ISIS) forcefully circumcised Assyrian men in Mosul, without anesthesia. The report does not specify the number of men that were affected but does state that it was an organized mass circumcision. ISIS has ordered the circumcision of all Christian children and adults who remain in Mosul.

The report also states that ISIS sold 700 Yazidi women for $150 each in a public slave auction in Mosul.

Please pray for the Christians remaining in Mosul; the Yazidi and the Christians who have fled ISIS; all those who have lost loved ones and those that need healing; for Jesus to appear to all Muslims including ISIS; for a world-wide awareness of the persecution of Christians; and an end to this crisis.–Assyrian International News Agency