Last Friday, Hamas TV broadcast a sermon which repeated the Hamas ideology that according to Islam, it is Muslim destiny to exterminate the Jews:

Hamas cleric:  “Our belief about fighting you [Jews] is that we will exterminate you, until the last one, and we will not leave of you, even one. For you are the usurpers of the land, foreigners, mercenaries of the present and of all times. Look at history, brothers: Wherever there were Jews, they spread corruption… (Quran): “They spread corruption in the land, and Allah does not like corrupters.” Their belief is destructive. Their belief fulfills the prophecy. Our belief is in obtaining our rights on our land, implementing Shari’ah (Islamic law) under Allah’s sky.”
[Al-Aqsa TV (Hamas), July 25, 2014]

Killing Jews as religious practice is a basic message of Hamas. Hamas TV broadcast a music video clip that taught the importance of killing Jews:

“Killing Jews is worship that brings us closer to Allah.”

Hamas believes that Muslim disdain for Jews and their eventual extermination by Muslims is intrinsic to Islam and includes it in the Hamas Charter:

Hamas Charter Introduction:
“Our struggle against the Jews is extremely wide-ranging and grave…”
Article 28:
“Israel, by virtue of its being Jewish and of having a Jewish population, defies Islam and the Muslims…“
Article 7: “Hamas has been looking forward to implement Allah’s promise whatever time it might take. The prophet (prayer and peace be upon him) said [in a Hadith]: ‘The time (of Resurrection) will not come until Muslims will fight the Jews; until the Jews hide behind rocks and trees, which will cry: 0 Muslim! there is a Jew hiding behind me, come and kill him!'” 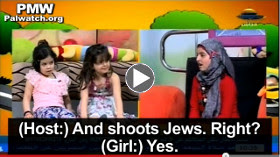 Child host (Rawan): “Tulin, why do you want to be a police officer? Like who?”
Girl (Tulin): “Like my uncle.” …
Child host: “OK, so what does a policeman do?”
Nahul (adult in giant bee costume): “He catches thieves, and people who make trouble.”
Child host: “And shoots Jews. Right?”
Girl: “Yes.”
Child host: “You want to be like him?”
[Girl nods]
Child host: “Allah willing, when you grow up.”
Girl: “So that I can shoot Jews.”

Moderator at Fatah ceremony: “Our war with the descendants of the apes and pigs (i.e., Jews) is a war of religion and faith.
Long Live Fatah! [I invite you,] our honorable Sheikh.”
PA Mufti Muhammad Hussein comes to the podium and says: “47 years ago the [Fatah] revolution started. Which revolution? The modern revolution of the Palestinian people’s history. In fact, Palestine in its entirety is a revolution, since [Caliph] Umar came [to conquer Jerusalem, 637 CE], and continuing today, and until the End of Days. The reliable Hadith (tradition attributed to Muhammad), [found] in the two reliable collections, Bukhari and Muslim, says:
“The Hour [of Resurrection] will not come until you fight the Jews.
The Jew will hide behind stones or trees.
Then the stones or trees will call:
‘Oh Muslim, servant of Allah, there is a Jew behind me, come and kill him.’
Except the Gharqad tree [which will keep silent].”
Therefore it is no wonder that you see Gharqad [trees]
surrounding the [Israeli] settlements and colonies..”

A Walk of Faith Begins with a Step of Faith