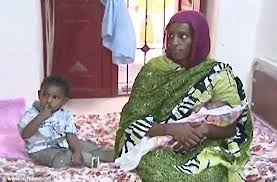 The Sudanese woman who gave birth in a Khartoum prison with her legs in chains has said that her baby daughter is disabled as a result of her treatment.

Writing for Britain’s Daily Telegraph, Harriet Alexander said that Meriam Ibrahim, 27, was sentenced to hang for apostasy on May 15, when she was heavily pregnant with her second child. Less than two weeks later she gave birth to Maya – but the prison authorities refused to remove the shackles on her legs.

“I gave birth chained,” she said, in her first description of the May 27 birth. “Not cuffs – but chains on my legs. I couldn’t open my legs so the women had to lift me off the table. I wasn’t lying on the table.”

When asked whether she was frightened that giving birth in such conditions could harm her baby, she said, “Something has happened to the baby.”

She explained that her daughter had been left physically disabled – but the extent of the disability would not be clear until the baby is older.

“I don’t know in the future whether she’ll need support to walk or not,” The Telegraph reported she said.

Ibrahim and her family remain in legal limbo – still in Sudan, awaiting permission to leave. Ibrahim’s ordeal began before Christmas, when she was reported to the authorities for having “abandoned” Islam. Sudan has enforced Sharia law since 1983, and apostasy is a crime punishable by death.

However, she told the court that she was raised as a Christian, by her Ethiopian Christian mother, since her Muslim father abandoned the family when she was six years old.

On Tuesday she reiterated the claim. “I’ve always been Christian,” she told CNN. “I couldn’t have been Muslim.”

When asked how she felt on hearing the death sentence, The Telegraph reported she said, “I was only thinking about my children and how I was going to give birth. I was really scared of giving birth in prison.”

While she was in the Omdurman women’s prison, she said that the other inmates taunted her, and made her upset “with all the things they said and the way they treated me.” She added, “… women in prison saying all sorts of things like, ‘Don’t eat the non-believer’s food.’ There was all this talk and taunts. Even the officers in the prison would join in.”

Religious scholars were sent to the prison to try and make her recant her Christianity – “a different sheikh coming to speak to me every other time,” The Telegraph reported she said.

Her husband, Daniel Wani, has joint American-South Sudanese citizenship, and throughout her incarceration was trying to secure a visa for his wife to travel to the United States.

Ibrahim was released from prison on June 23, but was once again detailed while attempting to leave Sudan for the US.

Authorities, acting on a tip from a travel agent, said that she was traveling on forged paperwork, because the documents were issued by South Sudan. The family was held in a police station for two days before being released into the custody of the US embassy.

“To be honest, I’m really miserable,” The Telegraph reported she said. “I left prison to bring together my children and settle down. I found myself in jail today and tomorrow and now there are protests against me in the streets. How can my paperwork be wrong? My paperwork came from the Embassy. Its 100 percent correct and it was approved by the South Sudan Ambassador and the American Ambassador.”

The Telegraph said Ibrahim’s lawyers have submitted a request to the district attorney to drop the forgery case, so that the family can finally leave Sudan and be safe.

t even think about her next move. ”

Please pray for the safety and immediate release of Meriam Ibrahim and her family, as well as praying for their encouragement and strength.–ASSIST News