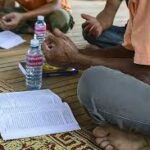 A new plan to evangelize unreached Muslim groups has been initiated by a missionary in Asia. In an effort to win more to Jesus, Andrew* began to ask the Lord for new strategies because he saw his prior efforts resulted in “winning the one and losing the 99.”

When a Muslim becomes saved, their family and many in their town deserts them. Usually this also results in the new believer losing their job, becoming mistreated, abused or even killed in the aftermath. Often the new believer must live in safe houses, or must leave town to survive.

Andrew wanted to evangelize Muslims while also being able to keep them in their own community. He also wanted to transform the community by having the former Muslim win others to Christ in a safe and effective manner — winning all to Jesus, not just the one.

Looking at how new believers evangelized in the Book of Acts, Andrew felt he must develop strategies to win the entire community.

After praying for his neighborhood, Andrew helped a young girl who was sick, a friend of his own daughter. As the girl recovered, the Muslim father of the sick child began to talk to the missionary, very grateful for the help.

Instead of preaching, Andrew privately prayed for the man, his daughter and the community. Very soon, the father of the little girl had a dream about Jesus and asked Andrew what it meant – because he knew Andrew followed Jesus Christ.

Andrew asked the father if he would like to study with him to find answers to the meaning of the dream. In a very non-threatening way, Andrew let the father read the Bible in his own language. Andrew asked the Muslim man questions so that he could discover himself the truth by the leading of the Holy Spirit.

The missionary started with the Creation account in the Book of Genesis. Since Muslims are programmed to reject Jesus as Lord and as the Son of God, Andrew felt that starting with stories about Jesus would alienate the man at the very beginning.

Andrew encouraged the man to share the stories with others, and invite them to come to the Bible studies. The little group began to grow, with many interested in the stories and seeking truth.

Andrew asked the villagers to share the stories in their own words, and how it affects them. The villagers soon found greater understanding from above.

He asked questions such as: “how does it affect you, knowing that God created the earth?” Andrew says the villagers especially relate to the stories and parables about farming and fishing. This way of discovering truths that directly apply to their specific lives allows God to reveal Himself to the individual as only God can, Andrew contends.

Andrew later read with his new friends more stories like that of John the Baptist, after trust and interest had been built. Eventually they get to the story of Jesus and His sacrifice.

As the villagers grew in understanding, Andrew realized he could teach the new believers to minister to their community by reaching out in love to others. He decided he should have them help meet basic needs in the community, and help with relationship issues.

For example, he had men talk about how to love their wives, develop new farming skills, and help others in need. This allowed the new believers to stay in the community and build bridges so others would attend the Bibles studies. And so the group has born much fruit.

Andrew says there is an emphasis in the West on conversion and a focus on the individual, but less on the discipleship and transformation of villages. “That needs to change,” he says.