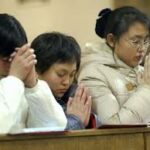 On April 28th, Zhejiang province officials bulldozed the 4,000-seat Sanjiang Christian Church in Wenzhou City despite a weeks-long protest involving hundreds of Christian attendees who formed a human chain around the church. What appeared to be an isolated event, has on further investigation by International Christian Concern (ICC) been revealed to be a widespread and massive anti-church crackdown with 64 churches in Zhejiang Province alone having been destroyed and/or their crosses (or steeples) torn down. China Aid is reporting that authorities once tore down 50 crosses in one day in Wenzhou City. Another 85 house churches recently received government orders to stop gathering and may face closure from the government by the end of May.

The wave of church and cross demolitions occurred after Xia Baolong, the Communist Party secretary of Zhejiang Province, conducted an inspection tour of the province earlier this year and was disturbed by a forest of crosses in the skyline and the number of large church buildings that host thousands of worshippers. “He found the cross on top of BaiXi Christian Church too ‘conspicuous’,” according to an ICC contact.
The “anti-church” campaign has been carried out under the vague provisions of urban development and beautification laws. The stated intent of the campaign was to “aggressively demolish illegal buildings in accordance with the law.” However, ICC’s investigation has revealed that even government-approved churches are facing demolition or cross removal such as the forcible removal of the cross on the steeple of BaiXi Christian Church in Wenzhou City on May 6, 2014.
The campaign is also almost exclusively targeting Christian sites. An ICC contact said, “The Zhejiang government has selectively enforced the law on only church buildings. Other ‘illegal’ structures did not receive demolition orders.”  During an interview with ICC, a Zhejiang believer said, “President Xi Jinping won’t be pleased by what the provincial party secretary, Xia Baolong, is doing because Xia is breaking people’s hearts and making local citizens scared of the government’s unpredictable policy. It is harming a harmonious society which the central government says it is working hard to build.”
Sooyoung Kim, ICC’s Regional Manager for East Asia, said, “Xia Baolong, the local provincial party secretary, is blatantly undermining China’s carefully crafted human rights image presented to the international community as he continues to implement his anti-church campaign to limit religious freedom and the gathering of Christians. He has ignored the desperate pleas of thousands of his own citizens, and the glare and condemnation of the international media spotlight.”
“Concerned Christians must call the Chinese embassy and ask them to reign in Xia Baolong’s attacks on churches in ZhejiangProvince. Ask them to enforce Article 36 of China’s constitution, and to immediately cease the demolition of churches and the removal of church steeples and crosses.”
Please pray for the freedom of Christians in China; favor for the Chinese Church with the government; salvation in Jesus Christ for Xia Baolong and President Xi Jinping; and for this persecution to end immediately. — International Christian Concern