Prayers by a Jewish women’s group, called W.O.W. for “Women of the Wall”, at the Western Wall in Jerusalem went without incident last 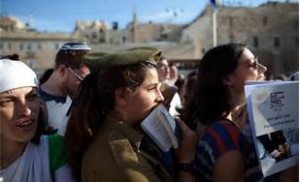 Sunday in contrast to violent scuffles and some arrests about a month ago.

The women wore prayer shawls, or talits, and other religious articles that ultra-Orthodox tradition demands are strictly for men. Police escorted the women to and from the site and guarded them throughout their prayer time on Sunday. Police spokesman Micky Rosenfeld said some ultra-Orthodox men shouted insults, but police made no arrests.

Last month’s prayer service by WOW, the women’s prayer group that has been seeking equality of worship and prayer between men and women at the Western Wall since 1988, was marred by violence as male protesters yelled obscenities and scuffled with police.

The group has faced many legal battles in their bid to pray as they choose, and one of the group leader’s homes was recently vandalized. Until recently, many of the group’s members had been arrested, accused by ultra-Orthodox leaders of violating “local custom”. Then in April, a court order backed their right to pray at what is called the “Wailing Wall”.

Women of the Wall said that more than 300 women attended the prayers on Sunday which took place in a fenced-off area near the wall. A group spokesman said it was “one step closer to equality.”

Israeli officials and lawmakers have been attempting to find a compromise that will satisfy both the women’s group and the ultra-Orthodox Jews. There is a proposal establishing a new section at the Western Wall where men and women can pray together, but Women of the Wall are insisting on their right to pray as they want in the current women’s section.

Under Orthodox Jewish practice, only men are allowed to wear talits and skullcaps, or yarmulkes; and most Orthodox Jews insist that only men may carry the Torah scroll. However, the more liberal Reform and Conservative streams of Judaism (which are the largest Jewish denominations in the United States, but marginal in Israel) allow women to wear talits, be ordained as rabbis, lead services and read from the Torah.

Also of note, the last election for Prime Minister of Israel did not have an Orthodox, or Hassidic, Jew running for this post for the very first time.