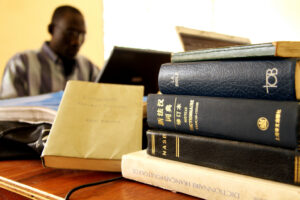 “These statistics are very important in showing progress toward our goal of seeing a Bible translation in progress in every language community needing it by 2025,” said Bob Creson, president of Wycliffe USA.

“Every generation before us has seen the numbers increasing as more and more languages were discovered, and more translation needs were verified,” Creson said. “Now that trend has been reversed.”

New technologies and strategies have helped expedite the process of translation – which often involves working in partnership with local communities to create a written form of the language. By using new creative approaches (team-based approaches that employ computer and satellite technology), Wycliffe, along with partners, has been able to translate the Bible more efficiently.