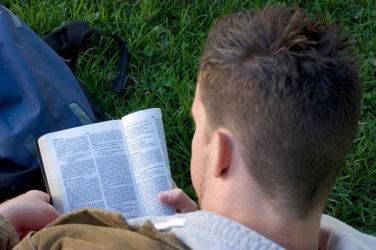 While the majority of churchgoers desire to honor Christ with their lives and even profess to think on biblical truths, a recent study found few actually engage in personal reading and study of the Scriptures.

However, when asked how often they personally (not as part of a church worship service) read the Bible:

“Bible engagement has an impact in just about every area of spiritual growth,” said Ed Stetzer, president of LifeWay Research. “You can follow Christ and see Christianity as your source of truth, but if that truth does not permeate your thoughts, aspirations and actions, you are not fully engaging the truth.

“God’s Word is truth, so it should come as no surprise that reading and studying the Bible are still the activities that have the most impact on growth in this attribute of spiritual maturity,” Stetzer said. “As basic as that is, there are still numerous churchgoers who are not reading the Bible regularly. You simply won’t grow if you don’t know God and spend time in God’s Word.”

2. Believing in Jesus Christ as the only way to heaven and the number of years one has believed this.

3. Making a decision to obey or follow God with an awareness that choosing to do so might be costly. Sixty-three percent of churchgoers say they have done this at least once in the last six months.

4. Praying for the spiritual status of people they know are not professing Christians.

5. Reading a book about increasing their spiritual growth. Sixty-one percent of churchgoers say they have done this in the last year.

“Bible engagement points people toward maturity and maturing Christians have practices that correspond to Bible reading. Almost all churchgoers want to honor God, but more than a third indicate obedience is not something they have done when it is costly to them,” Stetzer said.

“The impact of the Word of God on people’s lives is seen in the relationship between Bible engagement and turning from wrongdoings and choosing to obey God — two indicators of higher Bible engagement scores,” he added. “Such tangible life changes show the transformational impact of Bible engagement in the life of a disciple of Christ.”

These findings on Bible engagement are part of the largest discipleship study of its kind. Results from each of the eight attributes of spiritual maturity will continue to be released over the coming months.

To learn more about the transformational discipleship research visit LifeWayResearch.com. The TDA is available at TDA.LifeWay.com

For the study, LifeWay Research interviewed a demographically balanced online panel of American adults who attend a Protestant church at least once a month. A total of 2,930 surveys were completed between Oct. 14-22, 2011. — Baptist Press