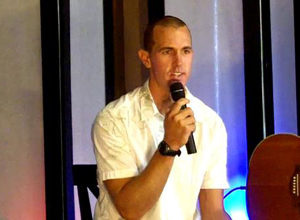 A divisive spirit reared its ugly head in a Texas church until a young man suffered a catastrophic brain injury. As church members locked arms to pray for a healing miracle, another miracle happened — the bitterness brewing in their midst suddenly vanished like a summer rain.

It started when the lead pastor and assistant pastor announced they would leave their church in Victoria, Texas to plant a church in Florida. Stunned church members were left shaking their heads, asking about their motives and wondering what would come next.

“All this brought division, with people going different ways,” says Nate Lytle, who was 23 at the time – and in many ways caught in the middle of the fracas. The departing pastors wanted Nate to go with them and become a college pastor. Many in the Texas church wanted Nate to stay as the youth pastor at his present church.

“I felt a lot of pressure; all great opportunities but I didn’t know where God would take me,” Nate recalls. “I kept praying, ‘God, I want your will to be done in this whole thing. Use me and do whatever it takes to bring you glory.”

Shortly after Nate prayed this prayer, he was standing atop a ten-foot ladder, helping to unload a large metal pipe in the warehouse of his father’s industrial supply company.  Nate’s father, Billy, was on the rack as they slowly eased the oil pipe out of its position.

Somehow they lost their grip and the massive pipe fell to the concrete floor. On its way down, it hit the bottom rung of the ladder and knocked Nate into a 10-foot freefall, sideways.

“It happened so fast I didn’t have time to react,” Nate says. “I tried to grab something, but there was nothing there.”

When he landed, Nate’s head hit the pipe with tremendous force. “My skull went on top of the pipe and it shattered like an egg.”

“I could see; my eyes were open, and I talked, but nothing made sense,” Nate says. “I was speaking gibberish.”

There was no blood on the ground, and his only visible injury was a broken wrist, completely folded back on his arm. At that point, his father didn’t realize Nate had a fist-sized hole in his skull and massive internal bleeding, with three hematomas in his head slowly growing to the size of a grapefruit.

“It was surreal because I was lying there dying and nobody knew I had a brain injury,” Nate says.

Billy Lytle sprinted 100 yards to the parking lot for his truck, which he wheeled inside to pick up his son. Then they raced to the emergency room at Citizens Medical Hospital in Victoria.

Nate’s mother, Tammy, met them in the ER room. “Nate, are you Okay? We’re here for you,” she said. At that moment, Nate’s head lurched backward and he fell out of his wheelchair.

A CTscan revealed his skull fractured into 100 pieces, many embedded in the brain, with the growing hematomas exerting potentially fatal pressure on his spinal cord.

In fact, the trauma associated with the fall caused Nate’s brain to shift 1.7 centimeters past its normal, centerline position. Known as a “midline shift,” any movement over 2 mm is considered potentially fatal.

One of the trauma doctors immediately recognized Nate had only 15 minutes to live, unless emergency surgery could be performed.

Victoria’s population, about 60,000, only supported one neurosurgeon, Dr. Keith Norvell. Unfortunately, he had been on an extended leave for two to three months. There was no time to fly Nate to San Antonio or Houston. Only Dr. Norvell could save Nate’s life – if he could be located.

“I fell at 9:15 a.m. that morning,” Nate recounts. “Dr. Norvell came back to the hospital one hour before that. It was his first day back from vacation.” Dr. Norvell also happened to be a Christian who had attended Bible studies with Nate’s parents.

Dr. Norvell studied the CT scan and shared his concerns with Billy and Tammy Lytle. “I’ve seen a lot of brain injuries,” he told them. “This is the worst I’ve seen on paper. I can not fix this.”

“We know you’re a believer,” Tammy replied. “We have to hold on to prayer because our God is bigger than this.”

As Nate was prepped for surgery, a remarkable peace and assurance swept over him. “I thought I was going home to heaven,” he recalls. “Some people might be afraid, but I had no regrets or worries because I knew where I was going. I had been serving God.”

His last thought was, I hope I made an impact in some people’s lives.

Meanwhile, the call to prayer had begun in the Lytle’s church, and two ICU waiting rooms filled up with church members – many locked arm-in-arm. “People said it was the most love they had seen in a hospital setting,” Nate recounts. “It was a beautiful thing.”

“Suddenly everybody dropped what they were doing and said, ‘Let’s pray for Nate.’

Mounting divisions in the church, with people going their own ways, seemed to fade away. “My injury helped bring people back together again,” he notes. “People started talking and praying with each other.”

“Only God can make a beautiful thing out of messes,” he adds.

Nate was in a coma for six weeks. Doctors informed his parents that he might never walk or communicate again. His parents heard the troubling stories about brain trauma injuries: people in a sleep state for years, people unable to eat or swallow by themselves, many confined to wheelchairs, unable to communicate.

His parents wondered, What kind of life will he have? Will he ever be normal again? Still, they continued to pray.

In his second week into the coma, a young nurse named Brianna was removing staples from his head. During the procedure, she inadvertently pinched him while she was taking the staples out, causing him to awaken very briefly.

“I saw a girl with bright eyes, nice teeth, and a warm spirit,” he recalls. His moment of recognition lasted only a few seconds – like a quick snapshot in his memory – then he fell back into the coma.

After two weeks, Nate was transferred to TIRR Memorial Hermann in Houston, the same facility that treated Congresswoman Gabrielle Giffords after her shooting.

Even while Nate was in his coma, he began to do things that amazed his doctors. “I was very weak because I lost 55 pounds, but I was able to walk with assistance,” he reports. “People usually don’t do this. The doctors were totally amazed and said they had never seen that kind of progress.”

“We knew thousands of people were praying and how big God is,” Nate says. “When you blend doctors and medicine with the power of the living God – this is the real miracle here.”

After Nate came out of the coma, he had difficult talking for six months. “I couldn’t find the word in my head,” he notes. “When I finally got the word, I had to get it from my brain to my lips.”

An acylic plate replaced the damaged hole in Nate’s skull and he went through another 13 months of outpatient therapy. Amazingly, he returned to surfing within one year of his injury.

During the therapy, the same nurse who left the vivid imprint in his mind during the coma was at this side, Brianna. The two married 21 months after his fall.

Nate has fully healed and is able to live a full and active life. With the help of his mother’s daily journal, he wrote a book about his amazing recovery, “More God: Seeing The Blessings Through The Pain” (NateLytle.com or Westbow Press).

“I brag about God so people can see how good He is, even in the worst circumstances,” he says. “God makes the miracles; it all came from Him.”