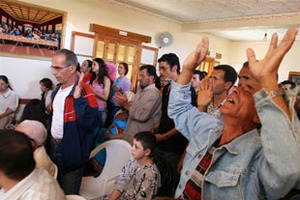 The idea of more than 200,000 former Muslims coming to faith in Sub-Saharan Africa within a few short years is mind-boggling. But entire mosques in Sub-Saharan Africa coming to faith? That news is even harder to wrap one’s mind around, but it is in fact what is happening according to reports from a former church planter among Muslims in West Africa.

In the new book Miraculous Movements, Jerry Trousdale, now director of International Ministries for CityTeam International, records amazing and inspiring stories of faith among Muslim communities in Africa. The author opens up a new world to Western readers, taking them into the heart of the “miraculous movement” of God in Africa that is transforming the hearts of Muslims.

Trousdale writes that “unprecedented” events are happening among the Muslim populations that his ministry and its affiliates are working among, including:

• Multiple cases of entire mosques coming to faith
• Thousands of ordinary men and women being used by God to achieve seemingly impossible outcomes
• Tens of thousands of Muslim background Christians becoming dedicated intercessors who fast and pray for the gospel to penetrate the next community
• Muslim people groups that never had even one church among them now have more than fifty church planted, and in some cases more than one hundred churches – within two years of engagement
• Former sheikhs, imams and militant Islamists making up 20 percent or more of the new Christian leaders in Muslim regions

“We had seven years now in Africa. And of the people in Africa, 81 different people groups that have at least 50 percent Muslim have now significant movements among them. Of those 81, 45 are people groups with 99 or 100 percent Muslim,” said Trousdale in an interview with CP. “So we are talking about fairly extreme areas of Islamic influence. These are people who have been Islamic for well over a hundred years, some hundreds of years.”

“This is just good news that God is in the same business as He was in the book of Acts,” said the missions leader. “Disciples are multiplying greatly and even priests, imams and sheikhs are becoming obedience to the faith. So I no longer doubt that we can finish the task in this generation.”

Although there are many poignant stories based on interviews with former Muslims in the book, one narrative about a blind former businessman is particularly hard to forget. Zamil (names in the book have been changed for security reason) was a successful businessman and a respected leader at his mosque. One night he dreamed that Isa al Masih (Jesus the Messiah) appeared to him and said that he (Jesus) was the light of the world. After that dream, Zamil could no longer see.

He came across some Christians who took him to a prayer camp where despite the prayers, his sight did not return. He later met Mama Nadirah, who was the organizer of the prayer camp, and she took responsibility for him. Zamil’s family, including his wife, abandoned him as soon as they found out he had become a Christian. He was blind, homeless and lost all his possessions after he became a Christian.

Under Mama Nadirah’s care, Zamil attended Discovery Bible Studies and learned to be an obedient disciple of Jesus and that Jesus commanded his follower to go out and lead others to him. Despite being blind, Zamil told Mama Nadirah he intended to go to another village and become a disciple maker for Jesus. Everyone gently told him that he couldn’t go because he was blind.

But then one morning Zamil got into a taxi and went to a Muslim community nearby. A few days later, Zamil called Mama Nadirah and told her where he was, and within a month he called to announce that a church had already been planted in the community and he was coming home before setting off for his next community.

“An unlettered widow (Mama Nadirah) discipling a successful businessman who had previously been a committed Muslim until he was blinded by the Light of the World, these are the kinds of miracles and turnabouts that are happening every day, launching movements of new Christ followers all over the world,” Trousdale writes.

While Trousdale first and foremost credits God for the unexplainable phenomenon occurring among Muslims in Africa, he also points to a new disciple making program. The counterintuitive Disciple Making Movement approach consists of the following strategies:

• Go slow at first in order to go fast later – Jesus chose disciple making as his strategy to prepare people to launch a global movement
• Focus on a few to win many – Jesus spent almost all his attention on intentionally discipling just 12 men, focusing especially on four of them
• Engage an entire family or group, not just the individual – the New Testament records whole families coming to faith
• Share only when and where people are ready to hear – only invest time in people God has already prepared to bridge the gospel into their oikos, or family or community
• Start with creation, not with Christ – Muslims need to start in Genesis to see similarities and differences how the Quran and Bible describe God
• It’s about discovering and obeying, not teaching and knowledge
• Disciple people to conversion, not vice versa – Jesus chose ordinary men and allowed them to walk with him as he revealed truths of God, then they came to a point where they decided to become a follower of Jesus. This discipleship model begins with discipleship and moves toward conversion. For Eve, it was knowledge instead of obedience that led to her fall into sin
• Coach lost people from the beginning to discover and obey biblical truth
• Prepare to spend a long time making strong disciples, but anticipate miraculous accelerations
• Expect the hardest places to yield the greatest results

“Too often, ministries focus on mass marketing the gospel, creating enough consumer impressions to drive demand, casting a wide net hoping to restrain a percentage of the fish from jumping out of our boat, reducing the gospel to the lowest common denominator of conversion rather than discipleship, with a hope (but not a plan) for eventual maturity,” writes Trousdale. “Without intending to dilute the gospel, the traditional approach to evangelism sometimes settles for making converts, instead of Jesus’ final command to ‘make disciples … teaching them to observe all things that I have commanded you’ (Matthew 29:19-20).”

He continues, “The irony is that Muslims in scores of different people groups are submitting their lives to Jesus at rates that are much faster than most church growth in North America. And it is happening, not by making the gospel journey somehow easier to traverse, but by focusing from the first day on making obedient disciples who are daily seeking to follow Jesus and obey his will. That is the pathway over which hundreds of thousands of Muslims have come to Jesus.”